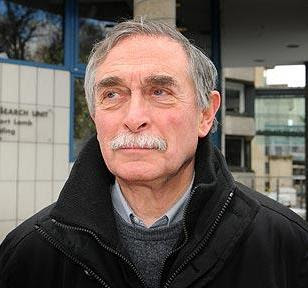 Prof Peter Liss, acting director of the University of East Anglia's Climatic Research Unit (CRU), claims sceptics are endangering the lives of generations to come by making unsupported claims. Critics of the science behind man-made global warming theories are playing "Russian roulette with the planet".

"The evidence is hugely for there being substantial climate change due to man's activities and if you want to argue against that case you have to produce some evidence," he said.

Er ... excuse me. The IPCC is making unsupported claims. We are pointing that out, all in the context of a demonstrably political process where science, quite clearly, has gone off the rails.

But this is the modern "post science" norm, it would appear. With the benefit of millions of pounds of taxpayers' cash, these people make their assertions, and sceptics, from their own resources, are supposed to prove them wrong.

This is a staggering perversion. It is up to the proponents of change to put up their arguments, then to expose them to scrutiny, entering into a debate where the issues are explored and discussed, against a backdrop of the free exchange of information.

Instead, we have a situation where, via the clearly flawed process of the IPCC report, a small group of scientists, backed by an international clique of politicians, have attempted to bounce the populations of the world into accepting their agenda, claiming that the "science is settled" and refusing to entertain debate.

Then, when a much-delayed and fragmented debate begins to emerge, up pops the likes of Liss, indulging in what is known in the trade as "shroud waving". Do as I say, or people will die ... the classic cry of the demagogue and the rent seeker.

And if any evidence as needed of how flawed the process has become, one only needs to watch the statement of Pachauri yesterday, in response to a direct question about "Africagate". This was not a scientist speaking, but a politician, bluffing it out in the knowledge that another admission of "error" would fatally damage his institution and his already flawed case.

What is so terribly dangerous is the limited response of the media in general to his statement. Here, in "Africagate" we have the clearest, unequivocal evidence of blatant scaremongering – totally (a word used without exaggeration) unsupported by science and, in fact, contradicted by peer-reviewed papers and observation.

In terms of domestic politics, if a leading politician had made a false claim that had such significant policy implications – with such a clear audit trail – and then blandly sat in front of a press conference and denied any error whatsoever (then refusing to entertain any discussion as to how he had reached that conclusion), the media would be all over him. He would be hounded out of office.

This is where the likes of Roger Harrabin completely fail to do their jobs. Likewise, with his easy acceptance of "Glaciergate" being a mistake, he sells the pass, ignoring the fact that the lead author, responsible for the false glacier claim, insists that the inclusion of the reference was not a mistake.

If, for one minute, Harrabin could break free from his own prejudices and stultifying ignorance, and recognise that which has been admitted – that the inclusion of the glacier claim was deliberate – and that, most likely, so indeed was the false claim about Africa, then he would also have to acknowledge that the shape of the debate changes irrevocably.

But, by buying into the fiction – in complete defiance of the evidence – that "Galciergate" was a single, isolated "mistake", Harrabin reinforces the preferred narrative that the IPCC report is still "fundamentally sound".

Of course, it is not. And the issues go far beyond WGII. The Mann "hockey stick" and the surface station temperature records have been sufficiently challenged to make any responsible journalist sit up and question the science. But, as long as ego-driven and fundamentally lazy fluff like Harrabin play their dire little games, this leaves the way open for charlatans like Liss to indulge in their shroud-waving.

He, Harrabin, and all the rest of the motley crew should be run out of town, replaced with some real journalists and real scientists, who have the skill and courage to do their jobs properly.