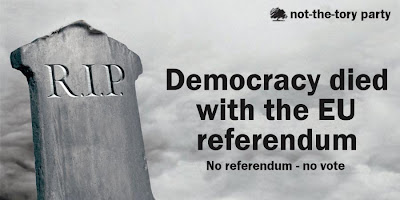 In The Independent, there is (as you might expect) an article about how web satirists are taking apart the pomposity (my word) of the Conservative poster campaigns. The airbrushed Dave was given merciless treatment and even we had a go. Now the gifted not-the-tory party have produced another poster, the mickey-takers are out in force.

Needless to say, we could not resist the temptation to have another go (above), making a point we have occasionally ventured in previous posts.

For me personally – as an intensely political animal – it is going to be an odd general election campaign. One is offered the choice between Brown, whom I detest, and Cameron, whom I loathe with every fibre of my being. I feel physically ill on the few occasions that I see him on television.

Therefore, the not-the-tory party option of "vote for us or you get Brown", which Hague repeated only last Saturday, simply won't wash. In fact, the truthful message would be, "vote for us and you get Barroso" – exactly the same outcome if you vote for Labour.

On that basis, it is not for nothing that I refer to the next election as an electorally mandated reshuffle. We get to chose an electoral college which, in turn, chooses the next member of the European Council. The faces change, but our government in Brussels stays the same.

Of course, there are still a few areas left where a new prime minister can exercise influence, but these are perilously few and diminishing all the time. Whole swathes of policy are reserved for our masters in Brussels.

In response, London politicians have adopted a dire deception, seeking to keep us focused on those few issues over which they have some control, either ignoring or fudging the areas where they are impotent satraps, there to do their masters' bidding.

That dynamic seems to define modern politics. Rather than embrace a wide range of issues, and debate them freely, the establishment seeks to control the message, excluding major policy issues from their discussion.

It is that fundamental dishonesty, more than anything, which grates. It the politicians will not engage with the issues over which we feel passionately – the closely related issues of the EU and climate change being but two – then the debate will go on without them. And, when it comes to casting our votes, an increasing number of us will be looking elsewhere.