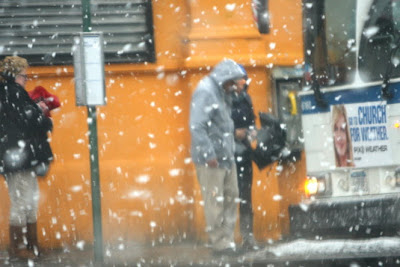 The global warming began falling in Staten Island NY at 8 am their time (five hours behind the UK). By the time it has finished, perhaps by tomorrow morning, 12-14 inches may have accumulated, whipped up by strong winds, possibly gusting to hurricane force.

Not under any conceivable circumstances however, are the warmists prepared to concede that this – or the exceptionally hard winter throughout the northern hemisphere – in any way affects their beliefs.

Instead, we hear tell that climate scientists must do more to work out how exceptionally cold winters or a dip in world temperatures fit their theories of global warming if they are to persuade an increasingly sceptical public.

And there lies a brilliant illustration of exactly where the so-called science has gone completely off the rails. The mindset is focused on trying to make "inconvenient truths" fit the hypothesis, rather than evaluating the new conditions to see if they refute it.

This mindset is further betrayed by the egregious Kevin Trenberth, head of the Climate Analysis Section at the US National Center for Atmospheric Research. As to why global temperatures have not matched a peak set in 1998, or in 2005, his view is that there could be a failure to account for rapid warming in parts of the Arctic, where sea ice had melted, and where there were fewer monitoring stations.

In other words, Trenberth is unable to accept evidence of cooling. It must be an artefact – the result of an incomplete monitoring network.

There is no place to go with this kind of distorted logic. It comes from the same wellspring as Dr Judith Curry, who believes that the rise in scepticism stems from a failure of the "climate community" to communicate effectively.

This line, it seems, is very much the preferred alibi of failed doctrines. We heard exactly that from former Tory leader Michael Howard, after the Tory trouncing at the 2004 Euro elections. We are hearing very much the same from Cameron's Conservatives, to explain their lacklustre performance in the polls. And we hear it constantly from the European Union, as the "people of Europe" fail to love it.

Trenberth says, viz à viz the "non cooling" that we (the warmists) need better analysis of what's going on, so that "everyone, politicians and the general public, are informed about our current understanding of what is happening." Furthermore, he wants more statements in a much quicker fashion instead of waiting for another six years for the next IPCC report.

He, like so many others, in so many disparate fields, fails to understand that it is the quality of the message, not the volume and speed with which it is delivered, which eventually prevails.