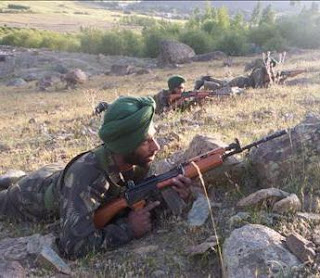 Anyone following the global warming rhetoric coming out of India recently will be under no illusion that the official line is that it represents a major threat to the human race – and especially the peoples of India.

Then you see a piece like this in the Pakistani Daily Times (not by any means the first of its kind) and you know the Indian rhetoric for exactly what it is – rhetoric.

The report here tells us that India is in a fix over releasing "secret data" on the Himalayan glaciers to the scientists studying the phenomenon of ice melting in the region.

These data are so classified that government glaciologist Dr VK Raina was refused access to his own work that he had done during his tenure in the Geological Survey of India (GSI). He was bluntly told that all GSI data was classified, which also included the water flow from the melting glaciers.

Raina was able to use some of the data he had – though at the risk of being hauled up under the Official Secrets Act (OSA) – in his report, trashing the Pachauri's claims of fast disappearing glaciers by pointing out that some glaciers had in fact "expanded".

But the fact remains that many of the glaciers are in highly sensitive border areas so data on the areas are withheld on the grounds that its release might be a compromise on the country's security. This reflects the fears that it might get into "wrong hands" and be misused by the "neighbours" – meaning, of course, Pakistan, but also taking in China.

And, if India cannot even co-operate on a regional level over areas supposedly of vital interest to the mankind's survival, putting its own national needs ahead of the common interest, putting men with guns where there should be scientists, then the hopes of anything sensible coming out of the region are next to nil.

Even though the guns in the particularly sensitive areas – such as Kashmir – are most often silent, there is a proxy war between Pakistan and India going on in Afghanistan, driving the insurgency there. That the two countries should then put aside their enmities and allow free-roaming parties of scientists to release potentially strategic war material is too much to ask.

The tragedy is that this insecurity is doing more than anything else to hold back development in the region. Between then, Pakistan and India field more than two million men under arms, each country having to bear crippling military costs. Settling the regional disputes would do far more that any amount of "mitigation" to deal with the rapidly disappearing global warming.

That too points up another evil of the global warming obsession. Huge amounts of intellectual energy and resources are being expended on a non-existent or low-order problem, while the more important issues are tucked into the background, unresolved.

These obsessives do more damage than they even begin to realise.