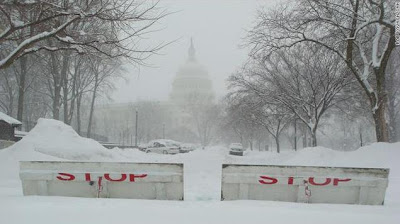 The latest snowstorm to hit the Mid-Atlantic has made this the snowiest winter on record in Baltimore and Washington.

As of 2 p.m., there were 54.9 inches recorded at Reagan National Airport in Washington. That's a half-inch above the previous record from the 1898-1899 season.

Bryan Jackson of the National Weather Service says that as of 7 a.m. Wednesday, 5.2 inches of snow had fallen at Baltimore-Washington International Thurgood Marshall Airport. That brings the total snowfall since December to 65.6 inches, the most since record-keeping began in Baltimore in 1893. The previous record, from 1995-96, was 62.5 inches.

From CBS via WJZ.