A well-financed and vicious plot 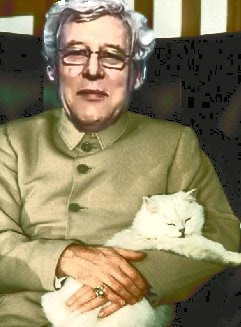 "For the first time, Indians are experiencing an organised, systematic and vicious attack by powerful and well-funded lobbies in the developed world.

These lobbies are aiming to diminish the perception of the impact of global warming and climate change on our common future, and the consequent need to change our lifestyle. Such lifestyle changes will damage the future of many industries, so there are vast resources and stakes in continuing present consumption styles."

That is the considered view of S L Rao, a visiting fellow at Dr Pachauri's Teri and former director general of National Council for Applied Economic Research (NCAER), writing in the Indian Business Standard under the headline: "Behind the attacks on Pachauri".

Pachauri himself is just as bad, if less explicit, reported in The Financial Times as declining to name anyone behind the concerted attack on the IPCC (and himself), saying it was probably backed by powerful corporate interests determined to thwart concerted action against global warming.

There I am then, sitting in the back room of a house that is not even worth as much as Dr Pachauri's back yard, deep in an obscure suburb of unfashionable Bradford, 200 miles north of London, fending off the bailiffs only with the help of our generous readers and the occasional commission for a newspaper – bashing away at a £300-laptop, so worn that the lettering on some of the keys is now invisible.

And now, variously, my little free-lance effort has become part of "an organised, systematic and vicious attack by powerful and well-funded lobbies in the developed world" backed by "powerful corporate interests determined to thwart concerted action against global warming" (probably).

But, according to S L Rao, the anti-climate change lobby has, after Copenhagen, mounted such an attack on R K Pachauri, and thus on the credibility of the IPCC and its reports on climate change. It started with vicious personal attacks on Pachauri’s earnings from his counselling of various organisations around the world.

When they discovered that Pachauri gave all payments made to him in connection with such work to Teri, says Rao, they charged him with using his position to help fund Teri. They then found a serious mistake in the findings in the IPCC's Fourth Assessment Report relating to the melting of Himalayan glaciers, and used this mistake to condemn the idea of climate change itself!

In the case of Himalayan glaciers, by focusing on an overstated conclusion of obviously incompetent "assessment", the anti-climate change lobby is trying to deny climate change as a whole. With its personal attack on the chief of the IPCC, it is trying to discredit his values and principles to claim that IPCC's reports are biased for his personal financial benefit and that of his organisation, thus discrediting all IPCC's laborious work in four reports over many years.

By further extending the attack to Teri, the lobby is trying to discredit the work of a unique Indian interdisciplinary research-cum-action organisation, and attack its funding sources — a vulnerable point of any research organisation.

We, in India, warns S L Rao, "must be aware of this well-financed and vicious plot by international agencies."

While the IPCC and all research organisations must be ever vigilant in terms of the quality of people it employs, the quality of supervision, and review, the work of two Indian "glaciologists" must not be allowed to bring disrepute to Indian science. But, we can be certain that the anti-climate change lobby will persist in trying to discredit IPCC's work, its president and others in the organisation.

These people just can't cope with the idea that they've been blagged by an unpaid blogger on the other side of the world, reaching out through the power of the internet, one of many other bloggers who have taken on the might of the warmists and have given them – and all their billions in funding – a run for their money.

Roger Harrabin of the BBC half gets it, noting that "the web is the home of right-wing bloggers who campaign politically against the IPCC." But, for all its frequent vitriol and false accusations, he writes, "the blogosphere has been proven at least partially right on occasions. Any future iteration of the IPCC, he says, will have to find a way of taking the serious bloggers seriously."

The trouble is they don't understand bloggers, don't understand how they derive their power and, most of all, cannot conceive that a few dedicated people, motivated entirely by principle, can use the medium blogging affords and run circles round them.

In their narrow, corporate world, slaves to their paymasters and their vested interests, they can only see the world through the prism of their own experiences. And, like S L Rao, they get it hopelessly and laughably wrong. That is why we're going to beat them. The "monster" always has a blind spot – and we've found it.