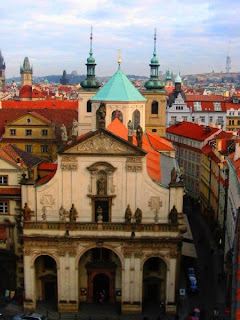 The latest "gate" - of a sort – has made an appearance, via Czech physicist Lubos Motl. He analyses on his blog the temperature record at the Clementinum in central Prague (pictured).

The site hosts the world's second oldest continuously working weather station after the Central England dataset, with records going back to 1770 which have not been interrupted or modified since 1775. And, in 1794, the Clementinum's annual mean temperature was 11.50°C and in 2005 it was 10.88°C.

Effectively, there has been no statistically significant warming in Prague since 1800, and that is without taking into account the urban heat island. That may be as much as 0.6°C per century and which would probably revert the 200-year trend to a significant cooling.

Despite this, the records have been excluded from the Global Historical Climatology Network (GHCN), from which the climate records have been compiled. They have been replaced by some gapped and strangely artificially adjusted data from the Prague International Airport, which doubtless give a different picture.

If there was anything like an honest and informed debate going on, then this would be big news, not least because it confirms so much else, where the accumulated evidence points to a sustained and deliberate tampering with the historical temperature record.

Given the inherent dishonesty of the imperious "Gavin" over at RealClimate (which actually has two million hits less than EUREF, despite starting two years earlier), there is no possibility of dialogue with the warmists. Mockery of their pretentions is the only real option.

Far more important than the warmist claque, however, is the Economist blog which trots through the "gates" with a superficiality that the Beano would find it hard to emulate, making lofty, ex cathedra pronouncements as to the rectitude of the "climate scientists" RealClimate. That is "prestige" in action for you: sceptics versus climate scientists – no contest in the writer's mind.

A similar line comes from CBS News as the establishment seeks to recover its dominance, after the multiple hits it has taken, retreating into a smokescreen of clever-dickery which allows commentators to appear knowing, without addressing any of the issues.

Fortunately, we see items like this in the Washington Examiner, which follows the path of this blog, with a "daily outrage" column, highlighting in this case money misspent on global warming.

Andrew Alexander in The Mail on Sunday (which I missed at the time) also offers a insight on the power of the myth, although this one has a way to run on this side of the Atlantic before the establishment deserts it here.

It is in the States that real battle will be fought. The EPA lawsuit documents have been lodged (such as this one) and they make powerful reading. For the first time, we are to see the warmists challenged in a formal arena, where they cannot duck and dive.

Without that avenue available to us over here, and with our politicians resolutely keeping their heads down, we are stuck with the political condom of the EU, which ensures that no serious debate is ever born. Thus, as so often, we are relegated to the sidelines, hoping "our" side will win but unable to participate in the action.

As for the "gates", without political engagement, we are approaching the point of diminishing returns. Every new finding has less shock value, and soon enough the media will run out of steam – and interest. After their brief flurry, they will move on.

However, with Pachauri refusing to move, the IPCC is fatally wounded. Things will never be the same again. The warmist creed is on the wane and, eventually, the politicians will catch up, and bow to the inevitable. We can entertain ourselves, in the meantime, by baiting the warmists and supporting the Americans, but short of shooting the denizens of our political establishment – an option which looks increasingly attractive – we are mere bystanders.