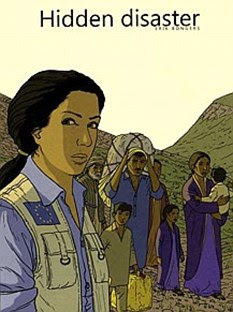 The Daily Mail and other assorted newspapers have been getting excited about a comic book portraying two fictional EU commission bureaucrats as humanitarian heroes.

This is being sent to schools and homes across the UK and mainland Europe at a cost of £200,000 to the taxpayer. It is printed in English, French, German, Italian and Dutch. Polish and Spanish translations are possibly to come later.

One can certainly understand the concern, both for the fact that the EU is once again indulging in naked propaganda, and wasting an amount of money into the bargain. But when it comes to either or both, this is just one tiny – and possibly least effective – part of the EU propaganda machine.

Another EU venture into schools, for instance, is a project called CARBOSCHOOLS+, linking carbon science laboratories with secondary schools to develop partnerships where "young Europeans" learn and conduct experiments about climate research and reduction of greenhouse gas emissions. As opposed to the roughly €250,000 spent on the comic book venture, €1.43 million is being poured into this, with €981,553 coming from the EU.

Children aged from 7 to 12 years are the target of the Children's university, a project currently costing €666,086, for "the most radical opening towards the general public that universities can undertake."

However, the commission has found through a number of Eurobarometer polls, the main way the "European Public" absorbs its information is through television. And, as one example of how it is using that finding, it is running a project called GREENTRANSPORT-TV to "contribute to the development of public awareness on the European research on Greening transport in all European countries through the professional use of television media." That is costing €822,865.00 with the EU contributing €691,910.

The EU also recently commissioned a project called "Science in Europe 2020" (SC2020). Funded to the tune of €1,500,000 – with a million of that contributed by the EU - this is a measure to support the "promotion of science by audiovisual means via European co-productions and the circulation of science programmes". Essentially, it is a bribe on offer to independent television producers to make films which "enhance the knowledge and the awareness of scientific research in Europe."

Nor is just money on offer. The lucky applicants are also be given access to "the leading world-wide broadcasting organisation, the European Broadcasting Union (EBU)". It has agreed to put at the disposal of this project "its unique position on the audiovisual market" – thereby ensuring the work is aired.

The EU is at pains to tell you that they exercise no influence over editorial content – this being left to the film-makers, but what we are seeing here is a relatively subtle attempt to create "agents of influence".

The effect can be seen in the behaviour of Geraint Tarling, head of ecosystem dynamics for the British Antarctic Survey. Having begun his own research career with funding from the EU Commission's Third Framework Programme, he went on to give EU funded presentations (in cooperation with the British Council) at a series of so-called cafés scientifiques, trying to explain "why climate change in Polar Regions should concern us all." That project cost €1.07 million, of which the EU paid €798,862.

So pervasive is the EU that, in every nook and cranny of public-funded scientific activity, you will find EU money – and influence. This, as with the film-making, extends way beyond financing research, even though much of the money actually comes from the research budget.

Thus, when the World Meteorological Organisation (WMO) held its World Climate Conference 3 (WCC 3) in Geneva last year – at an overall cost of €2.93 million – the EU was right there with its cheque book, contributing €200,000 to the proceedings.

It would not have needed to impose conditions. WCC-3 was aimed at furthering "the scientific basis to explain and predict changes in the global climate in the context of both natural and anthropogenic forcing with an emphasis on contributing, from the science perspective, to the development of policy options for appropriate responses to global changes."

Then, throughout Europe (not just the EU), the commission is funding a series of researchers nights, typically offering between €60-65,000 for efforts to "raise public recognition" of European science, usually promoting an EU core issue.

Along those lines, researchers from the National and Kapodistrian University of Athens in 2008, working under the aegis of the EU-sponsored "Researchers' web in society", told the public about their involvement in the climate change and greenhouse effect research and tried to "raise the alarm concerning the new global changes."

For that, the university was paid €60,580 – one of eight of such projects funded in Greece alone, out of a total of over 120 similar events Europe-wide, costing in total around €700,000. Even more money – just short of a milliom (€992,076) was spent on project 2WAYS, communicating European research about life sciences with science festivals & science centres/museums, and holding "Science Parliament" debates.

Museums are often used as a mechanism to convey propaganda, with another project – this one called ACCENT - currently in progress. At a cost of €1.35 million (including €1.02 million from the EU), fifteen relevant science centres, science museums and aquariums are being mobilised "to move the campaign on climate change from informative to the active phase."

Debates and conferences are a general favourite of the EU, one of the more egregious examples being GENDERA. At the cost of €1.03 million – of which the EU is contributing €798,666, this project involves a series of debates and a conference, the intention being to contribute to changing the conscious/unconscious "male-is-better" attitude widespread in research.

Competitions for "young scientists" are also grist to the mill, this one costing a relatively modest €300,000. For the full Monty, though, there is the 21st EU Contest for Young Scientists at €1.07 million.

The trouble is that none of these events, far more influential and costly than a crass comic book, have quite the same news appeal. Largely, therefore, they are ignored – or even supported by local media, despite even just the examples here amounting to well over €13 million. Strangely, although money "talks", it doesn't necessarily get noticed by the media.