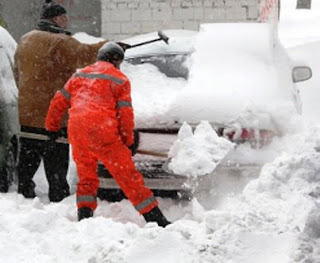 Much hilarity over at WUWT as the news reaches us that Moscow is under 20 inches of snow, making it the snowiest February in the Russian capital since 1966.

This makes for a long winter as deep snows were also experienced in early January and the snowfall in St Petersburg broke a 130-year record.

Flash back to December 2008 when Las Vegas was being battered by largest snowfall in 30 years while Muscovite dreams of a White Christmas were being shattered as the Russian capital was experiencing its "warmest winter ever".

The Russian capital then had a big problem – not unlike Vancouver's present troubles - as it was due to host the FIS World Cup Alpine promotional event, aimed at stimulating interest for Alpine Skiing as part of the build up to the Sochi 2014 Winter Olympics. The Mayor was forced to truck in snow from Siberia.

Then, of course, the warmists were shrieking about climate change but, with this current snowfall, they are silent. It is just "weather".

Meanwhile, straight from the "it would never happen here" department, the governor of snow-bound St Petersburg today dismissed 11 officials and deprived the heads of municipal districts of their bonuses over failure to remove snow from the streets.

Russia's second largest city has been fighting hard against record heavy snow which has left over 500 residents injured since late December, many from falling icicles - yet another hazard of global warming.

To tackle the threat, Governor Matviyenko has proposed using steam or even lasers. "However," he adds, "if St. Petersburg scientists throw up their hands and say that icicles should be removed using crowbars, we will use crowbars."

Nice to have scientists pronouncing on something useful for a change.