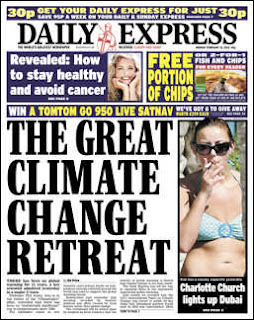 Currently standing at 476, the comments on the Mail on Sunday piece on Phil Jones must be close to a record.

With the commentary from Anthony Watts on the original interview, with Roger Harrabin, there can be no doubt that something remarkable has just happened.

Add to that Jonathan Leake's piece in The Sunday Times, headed "World may not be warming, say scientists", then mix in with the article in The Daily Mail today – which refers to the Leake piece – and the indications are that we are close to, if not at, a tipping point.

Factor in the The Daily Express lead story and the front page (pictured) and the piece in The Times, where Bob Watson argues that the IPCC must nvestigate an apparent bias in its report that resulted in several exaggerations of the impact of global warming. Then look at the crumbling edifice of the Muir inquiry into the CRU, under further attack from Steve McIntyre. It is evident that the temples of the global warming creed are tottering.

And, while this sustained attack on WGI data goes on, Booker ploughs his solitary furrow, sustaining the attack on WGII and its co-chair Martin Parry. However, an unrepentant Parry comes out of hiding today in The Guardian, clearly unaware of how much the tide has turned.

This signals that there is a long way to go before the institutional inertia supporting the global warming industry can be overturned, and the lack of political engagement by the Conservatives is a major handicap. Until and unless this issue goes political, there is little to sustain it in the long run. Without that political traction, skeptics will find it hard to keep up the momentum, feeding fresh stories to the media. The campaign could falter.

Thus, it is also essential that the two-front campaign is kept up. Rightly, the focus is on Jones at the moment, but the weak links of Pachauri and Parry must also be kept under pressure. Not for nothing are they trying to hold the line as they seem to appreciate, perhaps more than some on our own side, where the danger lies.

In this, "Africagate" is a gaping hole in the IPCC – the chance to extract another, and possibly fatal – admission of error. WGI and Jones may be "Normandy" but "Africagate" is the Eastern Front. And two fronts, not one, are needed to defeat this enemy.