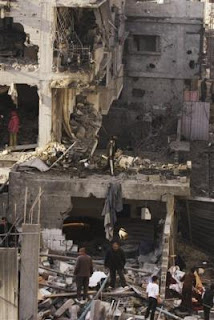 Winnie-the-Pooh used to describe himself as a bear of very little brain and this expression tends to stay in my mind whenever I hear British and European politicians produce idiotic solutions for the Middle Eastern problems. Except that Pooh knew the truth and, therefore, in Socratic fashion was cleverer than all these politicians put together. (Hey, you have to keep up when you read this blog.)

Thanks to Powerline, I was directed to a very good and very balanced article by Khaled Abu Toameh, an Israeli Arab journalist who writes for the Jerusalem Post. He does not think Hamas has been destroyed but neither does he think the prospects its leadership faces are particularly good, largely because of its own behaviour.

Moreover, the IDF operation has sent the entire Hamas leadership in the Gaza Strip into hiding. When and if Prime Minister Ismail Haniyeh and senior leader Mahmoud Zahar emerge from their hiding places, they are likely to face criticism for abandoning their people during war.

The fact that Haniyeh and Zahar chose to hide out of concern for their personal safety has severely undermined their prestige.

Only days before the operation began, the two appeared in public to mock Israel's failure to respond to the rocket attacks. They also warned Israel against attacking the Gaza Strip, saying Hamas had prepared "surprises" for the IDF.

The military offensive has not only sent Haniyeh and Zahar into hiding, but has also succeeded in driving a wedge between them and their Hamas colleagues in Syria.

Read the whole piece. I don't suppose our Foreign Secretary will, though it will not take long.