The fug of war 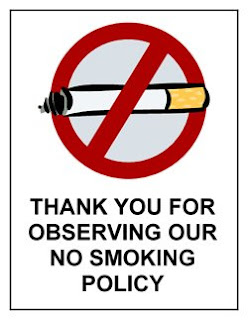 Tom Leonard has spent a week in New York, watching United Nations diplomats flagrantly ignoring their own "no smoking" rules. It was hardly surprising, he says, when Israel and Hamas were similarly unmoved by the organisation's somewhat more serious ceasefire resolution in Gaza.

The UN's protracted and unhappy battle to ban smoking inside its New York headquarters, writes Leonard, doesn't exactly encourage confidence in its ability to enforce its will anywhere else. The fug of smoke sat heavily in the delegates' lounge of the Security Council (a great name for a bar) but denser still in the basement "Viennese Café" – though not enough to obscure the
no-smoking signs – just yards from where Arab League leaders tried to thrash out an agreement before the mullahs bashed them at Friday prayers.

Each café table came with its own decoration, a fragrant plastic cup full of cigarette butts that staff obviously felt they couldn't clear away without further raising international tensions. (The protocol appears to be that the de facto ashtray remains in place until a patron from a country with a stronger track record on toxic waste disposal decides to sit there and throw it away.)

The Assembly voted in November to outlaw smoking in the building, but it has as much chance of success as Kofi Annan did five years ago. All too aware that New York's leaders have long resented the UN being a law unto itself, the former Secretary-General wanted to match Mayor Michael Bloomberg's outlawing of smoking in public indoor spaces in the rest of the city.

Sergey Lavrov, Russia's then ambassador, summed up the feelings of many as he grumbled that Annan "doesn't own this building" before stomping off for a fag in the delegates' lounge. In true UN style, the smokers demanded a legal ruling against Annan's decision without a vote from member states. The fug stayed.