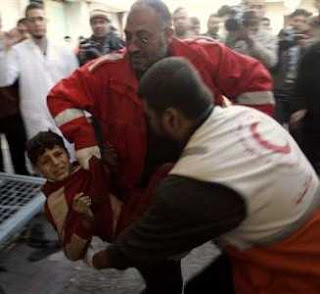 Unable to defeat Israel, and knowing that an all-out, unrestrained military operations would destroy them, first Hezbollah and now Hamas have been employing the same stratagem to enable them to pursue their terror campaigns yet avoid annihilation.

The stratagem was perhaps discovered by accident in April 1996 when a UN-supervised building in the centre of the village of Qana had been shelled during an Israeli operation code-named "Grapes of Wrath, aimed at clearing out Hezbollah from the region. This had resulted in over 100 civilian deaths, the resulting international pressure precipitating the withdrawal of Israeli forces from Lebanon.

On 30 July 2006, in the second Lebanon War, when the Israelis were attempting to complete the job they had started ten years before, Hezbollah was struggling against the might of Israel and desperately needed a cease-fire in order to regroup and re-build its forces and stocks of weapons. By what appeared to be convenient coincidence, in the small hours of that morning an IDF aircraft was claimed to have bombed a building in the hamlet of Khuraybah, close to Qana.

Hezbollah operatives were quickly asserting that that 60 or more people, many of them children, had been killed. With the complicity of the international media, the recovery of the bodies was stage managed, the figure of "Green Helmet" milking the event for maximum publicity value. The resultant photographs were then used to marshal the international community to press for a cease-fire, finally implemented on 14 August. Once again, Hezbollah had escaped the full consequences of its terrorism.

Now, having provoked Israel beyond endurance from its enclave in Gaza, Hamas, and under extreme pressure from Israeli military action, seems to be playing the same trick, going to the extent of engineering a "massacre" which will mobilise again the international community to push for a cease-fire.

Such is the obvious construction to be drawn from the incident yesterday when Israeli forces "bombed" – or otherwise attacked - "UN schools" being used as refugee centres, and are being accused of killing "more than 50 people," including, of course, many children.

Hamas terrorists, however, have been deliberately placing themselves in the grounds of at least one of these schools while attacking Israeli forces, in order to provoke an Israeli response. This goes beyond using women and children as "human shields". This is a deliberate attempt first to engineer their deaths and then to exploit those same deaths for strategic military gain.

That, in at least one of those same schools, many of the deaths may have resulted from secondary blast, indicates that ammunition or explosives may have been stored in the building, this maximising deaths arising from a provoked attack. One cannot even rule out the placing of explosives deliberately set be to detonated by a primary shock.

The choice of a UN supervised building – as in Qana 1996 - seems too much of a coincidence, thereby ensuring the active engagement of UN officials who have been quick to condemn this "rule of the gun." 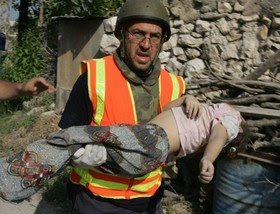 Sensibly, however, the Israelis have excluded the international media from Gaza, an exclusion which has had Robert Fisk wailing and gnashing his teeth. The Israelis have also been quicker with their rebuttals, this time providing video evidence of Hamas using school buildings for mortar attacks.

Nevertheless, with Pallywood Productions Inc in high gear, carefully posed photographs (see above, top) are flooding out of Gaza, redolent of the Qana scenes - see right. But, even though the left-wing media is in full cry, the events do not seem to have gained the same political traction as the earlier episodes. Needless to say, the Tranzies are pushing hard for a cease-fire, playing into the hands of Hamas, determined to perpetuate the agony of the people of Gaza, but again there is not the same head of steam that we saw in 2006.

Still, the line is holding – that only a complete cessation of violence by Hamas will call off the IDF. Olmert is now "indicating" that he is open to international efforts to end hostilities if Israel can be sure that supplies of weapons to Hamas will be severed by international monitoring of Gaza's border with Egypt.

This requires the Tranzies to step up to the plate, and then rather neatly transfers to them any responsibility to ensure that violence does not recommence. Hamas must be hoping that pressure mounts for a cease-fire to fend off an outcome that would most definitely restrict their homicidal campaign.

However, with the "Green Helmet" manipulation of the second Qana still fresh in people's memories, the same trick by different dogs does not seem, so far, to be having the required effect.