Are they getting worried? 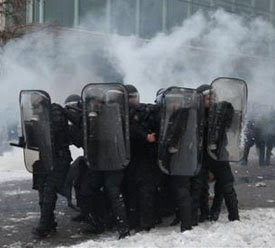 Strictly speaking, civil disorder in member states is none of the business of our supreme government in Brussels. Maintaining law and order on the streets is a matter for provincial governments.

However, the ever-watchful Bruno Waterfield tells us that the euroweenies have called for "emergency talks" to discuss the groundswell of social unrest and violent street protests that have spread across Europe.

So far, Bulgaria, Latvia, Lithuania, Hungary, Greece and Iceland (is that Europe?) have all faced social unrest and rioting as unemployment soars and – so Bruno says - as many European countries have been forced to impose severe cuts to government spending. Thus, the March European Council is to examine the increasing unrest, regarding it as one of the "major challenges" for the Spring Council.

Sarkozy has already raised the spectre of "May 1968" protests spreading across Europe, although it is hard to take that seriously. There is nothing like the undercurrent of "revolution" that prevailed then. There is no ideology that is driving the crowds. They are just pissed off with their rulers. Which gives the demonstrations a nihilistic tinge.

Anyhow, what the euroweenies are considering is "intensive sharing of information", which include "regular updates" on the situation in various European countries. What they can get from that, which cannot be got from open source, is hard to imagine. Usually, in these sorts of situations, the official channels are the last to know what is happening.

However, there is some sense in what one EU official is saying. "People," he observes. "obviously are seeing what is happening in other countries in the rest of Europe, such as Greece, and they thought 'Why are we so calm?'" They are particularly worried about developments in Bulgaria where hundreds of Bulgarian protesters have clashed with police, smashed windows and damaged cars in Sofia when a rally against corruption and the economic crisis turned into a riot last week.

There is a point there. Considering how badly our rulers have managed our national affairs – here not least – we should all be out in the streets ripping throats out and racing tumbrels to the nearest public guillotine.

Perhaps it is too early yet, as most people – especially the bloated public sector – are not really hurting yet. It needs more time. Possibly, that is what is really worrying the euroweenies. They suspect its coming, but they can't work out when.