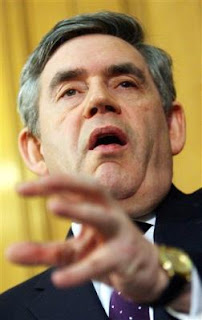 You would have to live on another planet not to be aware that the global – and especially the British – economy was in meltdown. While some other newspapers indulge in Obamania, The Daily Telegraph, at least, devotes the bulk of today's edition to the accelerating crisis.

But, despite the acres of newsprint, it seems that the learned – and not so learned – commentators have not even begun to understand the nature of the crisis and its root causes, the one begetting the other.

This is seen in the Telegraph leader (print edition only) which attributes the UK banking problem, with its "toxic debts" and excess credit to a "regulatory regime that allowed it to happen". But this, the paper asserts, was "designed and constructed" by Mr Brown, which makes him "complicit" in the collapse of the country's most important industry.

Viewed as always through the prism of national politics, what this fails to recognise is that, while the financial system was globalising, so was the regulatory system – with the Basel committee and other international bodies taking the helm.

The net effect was that we were saddled with an inflexible, slow moving and wholly inadequate system of regulation and, as importantly, it was one over which no single – or any – nation had control. As was the global financial system out of control, so was the regulatory system.

It is instructive, therefore, to see that the response of the British government has been to nationalise the banking system. The effect of that is to reassert national control. But there is no recognition that the other half of the equation – the regulatory system – also needs to be nationalised.

Thus, in effect, we are getting the worst of all possible worlds. While private companies are being bought up by the government with public (i.e., our) funds, the very system which allowed them to go to the brink of destruction – and even beyond – is being left almost completely untouched, its role wholly unrecognised.

To that extent, Brown is dealing with the symptoms of the crisis and not the cause, which any doctor will tell you is not the optimal way of dealing with a problem. But when we have the serried ranks of the establishment – which includes the government, the opposition and the media – refusing even to do a proper diagnosis, there is very little chance of the correct remedies being applied.

That, unfortunately, leaves the rest of us as spectators, able only to watch the developing train crash, without in any way being able to influence the outcome. Our only role, in due course, will be to pay for the mess but, this time, we have no assurance whatsoever that it will not be repeated. As long as the idea of returning to national control over our own assets and businesses is rejected so roundly by our ruling classes, nothing will get better.

And that idea, sadly, has yet to re-establish itself. We have a long way yet before we reach bottom and it becomes fashionable again.

Update: Ambrose offers his latest "take" on the slide in sterling. "For the first time since this crisis began eighteen months ago," he writes, "I am seriously worried that British government is losing control."

Surely the point is – and it is one I have made many times – is that the British government lost control a long time ago. Interestingly, in December 2007, I wrote a piece headed "powerless", picking up on a Telegraph leader headed: "Gordon Brown is in control of very little". That was true then and it is true now.

In many ways, Brown is as much a passenger of events as are we all. That is the really terrifying thing – nobody is really in control. The mighty machine of global finance is falling apart and there is nothing anyone can do to stop it. No wonder Obama is taking several days out for his inauguration celebrations. Perhaps he is hoping that, by the time he gets to his desk in the Oval Office, it will all be over, with just the jobs of clearing up the wreckage and rebuilding to do.