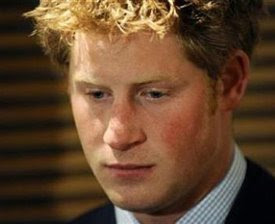 Normally, this is a subject I wouldn't touch with a barge pole although, having had my ear bent for at least ten minutes by the two (Indian) brothers who run the local newsagent, some comment is called for.

This subject is, of course, Prince Harry's offhand comment about our "little Paki friend …", one which the great sage, Mr Gordon Brown, opines that the British public will "forgive". Some will, but others won't.

Actually, though, the media has missed the point – as it always does. Prince Harry was referring to Ahmed Raza Khan, now a Captain in the Pakistan Army. What was far more offensive than the epithet "Paki" was the use of the word "little". This, more than anything, betrays the mindset of our ruling classes – arrogant, contemptuous and condescending. The use of "little" as in "Oh, we have a little man to do these things for us," reveals their innate sense of superiority, and their view of us, the "great unwashed", as inferior beings.

What is also striking is the behaviour of The Daily Telegraph. In its leader, the paper opines of the affair that, "the headline coverage it has received over the past 24 hours has been excessive." Now see the print edition, in which the leader appears: a page one photograph and story, a full page three story and then two opinion pieces. One wonders, as we have before, whether the leader-writers have any idea what is going on in their own newspaper.

As for Harry – he is a child of the system, reflecting its thoughts and values. In that sense, the story is important. But rather than look to this immature and rather gauche little rich boy, the great and the good should look to the society that produced him. They will not, of course. The image in the mirror is far too ugly.