The capacity to destroy 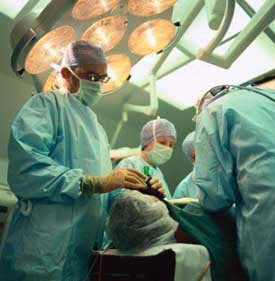 When tasked with anything constructive, the EU is displaying a consistent and predictable propensity towards failure. Its positive contribution to the wellbeing of mankind is precisely nil. When it comes to destruction, however, its capacity is unlimited and unparalleled.

An example of this malign capability comes in The Sunday Telegraph today, which headlines a story, "New EU working laws will be disaster for NHS". This is the Working Time Directive and we have already pointed out the effect this will have on the retained fire service. This is much worse.

According to one of Britain's top surgeons, the changes required by the directive to hospital working hours - coming into force this summer – will be "disastrous" for patient care and result in "major service failure".

This is John Black, president of the Royal College of Surgeons. He makes no bones about it (to coin a phrase). The new rules are "an impending disaster" which will "devastate" medical training because no surgeon will be able to work a shift long enough to gain proper experience.

The multiple handovers of staff needed to comply with the rules will mean that patients do not see the same doctor for more than a few hours. There could be "dangerous" lapses in patient care, especially at night. "With nobody able to work more than 48 hours a week from August, the effects on patient care in the NHS are potentially disastrous," Mr Black says.

He goes on, retailing a litany of woes which all point to the fact that going to hospital will be that much more dangerous than it is already. People are going to die, unnecessarily, sometimes horribly. And the EU will be to blame.

Black is meeting Alan Johnson, the health secretary, in February to propose a "speciality opt-out" and an upper limit on surgeons' hours of 65 to 70 hours a week. "I have no doubt we will be told that it is impossible to alter or bypass the European law. I do not believe this," he says. "All manner of EC law must have been bent or ignored in nationalising a bank in 24 hours. The government can do it if it has the political will."

But what is terrifying is the Orwellian response from Department of Health. Instead of acknowledging a very serious problem, it offers the anodyne statement that, "A few hospitals have implemented the maximum 48 hour week across all rotas. We are monitoring the situation as some smaller specialities and isolated hospitals may find meeting the deadline more challenging."

Never must it be admitted that the EU is tearing our nation apart, much less that it is going to kill people. No, the bureaucrats merely "monitor the situation" and, in due course will find nothing wrong at all – as the rapidly-filling cemeteries offer mute witness to their lies.