A nice old dust up? 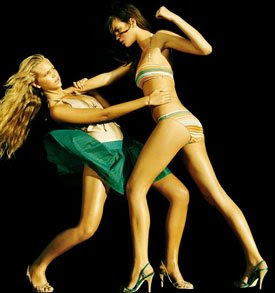 On Thursday, German economy minister Michael Glos was expressing "serious
misgivings" about the EU's emissions trading scheme, complaining that it could cost jobs if it went ahead in its current form. His own scientific advisory board is urging the repeal of strict limits for CO2 emissions, and an easing of the system in order to stabilise the price of permits.

This may or may not be connected with an announcement yesterday that the German energy giant RWE has decided to build no more new power plants in western Europe, as the EU's emissions trading scheme has rendered new projects "unprofitable".

"We will go ahead with power-plants which we are already planning or which are already under construction," said Johannes Lambertz, chief executive of RWE's power unit. "Further projects are on hold until they become economical."

Lambertz adds that, "The current framework leads to a situation where it can be more economical to continue operating old power plants than to build new ones and then having to bear the costs for the construction and the emission certificates."

Connection or not, it looks like the Germans are set for a confrontation with the EU over "climate change", a dust-up which is potentially even more attractive than the one pictured.

I tell you, its obsession with "climate change" is going to be the undoing of the EU. The electricity riots of 2015 are going to make this look like a Sunday school outing.