The capacity to destroy II 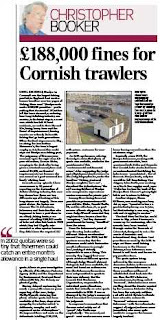 Having been professionally and emotionally involved (not a happy combination) in the fate of Britain's fishing industry, Booker's column today makes painful reading.

It is the final chapter in the destruction of our once-proud and profitable industry, torn apart by the combined depredations of the EU's Common Fisheries Policy and the wilful zealotary of our own loathsome officials, permitted by the acquiescence of our politicians and the stupidity and malign myopia of the media.

This is a policy which, as Booker observes, has 82-year old Doreen Hicks weeping in the dock after being given a criminal record, fines and costs of £3,500, on threat of imprisonment, just because she was named as a part-owner of her family's fishing boat.

Yet such is malign effect it has on the professional claque of "environmentalists" that we have that extremely unpleasant fool Charles Clover prattling on that "fraudulent fishermen everywhere, even in the EU, lower the price of fish for legal fishermen and kill more fish than they should, depleting scarce stocks that belong to us all."

This landmark case, writes Clover, "is a milestone towards making that kind of behaviour socially unacceptable at last." Booker has his own riposte.

The immediate problem is that the Anglesey plant relies heavily on constant supplies of electricity and is supplied at a discount price by the nearby Wylfa nuclear power station. This is now state-owned through the Nuclear Decommissioning Authority (NDA). If the NDA was privately owned, it says it would be happy to carry on selling power to its largest customer at a discount. But under EU state-aid rules this is now "against the law".

So it has been announced last week that the pant is to close next September, with the loss of 500 jobs. Thanks so much, the EU. Again it has shown yet its capacity to destroy.

As ever more of British industry disappears, writes Booker, with Lord Mandelson predicting that even the City of London will emerge from the slump much reduced, it seems we shall soon have to live on air. Then, when Brussels discovers that air contains carbon dioxide will even that be beyond our reach?