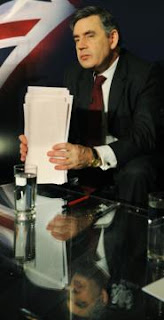 A few days ago we wrote about a political disease called "futuritis" – the affliction which causes politicians to ignore to problems of today, while they focus on the sunlit uplands of some mythical future, when everything comes right.

Today, in the persona of our Revered Leader, Mr Gordon Brown, we see evidence of another, equally debilitating disease which we shall call "Tranzitis". This is manifest as a compulsion to ignore domestic issues – and home-grown solutions to problems which affect the nation. Instead, politicians look for international or preferably global solutions which they can apply to their own domains.

So it is that we see Mr Brown, wrapping himself in the Union Jack, pronouncing to all and sundry that he has been "warning for ten years" that the international financial markets needed to be more strongly regulated.

He tells us that it was a decade ago in Harvard that he first called for an international early warning system to alert countries to developing crises in any part of the world. This was needed "because the huge global growth and reach of financial systems meant that all markets, all economies and all banks were now interdependent."

This is a man who, at the same time, has presided over the collapse of the domestic financial market, admitting that he "did not see it coming". Not least of the problems was that British systems of regulation had been weakened in favour of untried and largely ineffective international systems – thus making them "interdependent", the creed of the tranzie.

In that sense, creating an "interdependent" system is setting up a domino chain – knock one down and they all go. We need independence, not interdependence, in core systems, in the same way that an airliner has multiple independent control systems in case one fails.

How far the disease has spread is demonstrated by Brown's pathetic jibbering about creating "a framework for the international governance that we currently lack." We must, he says, "consider at a global level the regulatory deficit," complaining that "the current patchwork arrangement is inadequate."

Mr Brown should, of course, forget about "international governance" and concentrate on national governance, getting that right first. There, however, so many powers have been outsourced to international agencies – not least the EU - that there is very little he can do. Hence, it is much easier for his diseased brain to take refuge in his "tranzitis", in which delusional state, he can – in his own mind – ignore the train wreck that is the British economy.

However, the diseased mind cannot cure itself. We need an antibiotic – it is called "nationalism".