There is no hope … 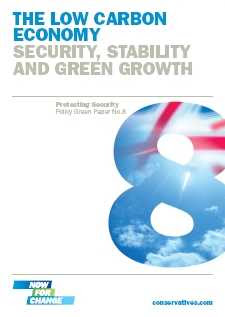 There can be no argument that the dominant issue of today is the economy. But, second only to that is energy and, in the longer term, that is the most important issue for one simple reason. Without energy – and especially a secure electricity supply – there is no economy.

Assuming that our next provincial government may by led by the Conservatives, their plans on energy are of some importance, as it will devolve to this administration to sort out the mess bequeathed to us by the current Labour government. Thus, for some time, we have been actively calling for a Conservative statement on energy policy.

We need not have bothered.

Today, in a "unique online experiment", David Cameron has unveiled his Party’s policy on the Conservatives.com website. And it takes less than a nanosecond to see where he is coming from, its title … "Our Plan for a Low Carbon Economy". The full document is here.

Embedded in it is the warmist creed, with not the slightest recognition of, or concession to, the massive debate that has been going on over the AGW scare. The creed is writ large with no less than 35 references to "climate change" in a 55-page document, plus two on "global warming".

One of the gems is: "Some people remain sceptical of the majority of scientific opinion that suggests that climate change is real, immediate, and one of the greatest challenges facing the world today," which the paper deals with by invoking a speech by Margaret Thatcher in 1990 – which actually does not support the case put.

As to the detail, the Conservative "plan" is summed up as follows:

I wish it was possible to summon up enough energy (and interest) to fisk this properly, and take it apart. But it is so bad, so woolly, so detached from any reality, that it is not worth doing. Nowhere in the document is there any sense of an impending energy crisis, or any plans – coherent or otherwise – to deal with it.

If this is the best the Conservatives can offer, then there truly is no hope. We are doomed to a future with no lights and no heating, while the Tories prattle on about "decarbonising our economy". They have totally, completely and utterly lost it.