History repeats itself … sort of 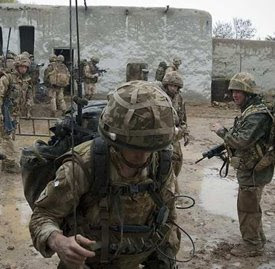 It is inevitable that, with the Gaza conflict entering its latest and even more horrific stage, the global media is focusing its attention and its resources on covering the story. But, in the manner of things, the Jo Moore phenomenon is rampant. A huge amount of other news is getting buried.

One such area is the war in Afghanistan, aided and abetted by the MoD which has been reluctant to tell us that a major operation has been going on in Central Helmand, which began in mid-December, in atrocious weather. Presumably, it did not want to tell us that our soliders were fighting the Taleban in case the enemy … er … the Taleban, found out.

This is somewhat redolent of the battle of Musa Qala the December before last, when the military, in the name of "operational security", closed down its information system, leaving enterprising journalists to telephone the Taleban in the town to find out what was going on. It seems the MoD is incapable of learning even the simplest of lessons.

However, even that news which has leaked out has been given minimal coverage by the media and one is reminded of the 2006 Lebanon war, which started on 12 July and ran on through until the cease fire in 14 August, formally ending on 8 September. Equally then, the media – and this blog - was heavily focused on the events there. And, in an uncanny resemblance to the current situation, many important events went completely unreported.

This is coming through loud and clear in my researches for the book, where I find that there were major events occurring in southern Iraq under British occupation that completely escaped the attention of the media. Those events, as it turned out, were the turning point of the campaign, yet many of them remain obscure, even to this day.

So it may well be with Afghanistan, where the tempo of operations is producing a significant casualty rate. Yet, as with Iraq at the time, virtually the only information that was being published was on the steady trickle of soldiers getting killed.

Of special interest in yesterday's Telegraph, therefore, was a long feature by Thomas Harding, reflecting on precisely this issue. "The numbers of dead are harrowing," he writes, "but they do not tell the whole story." He then continues:

This is a counter-insurgency campaign, in which the measure of success is more likely to be determined by the miles of new roads built than the numbers of Taliban – or Britons – killed. And even though we have been in Helmand for four years now, almost as long as the First World War, military planners are preparing for a prolonged campaign.

"If we take more casualties this year, the world will not end," says one of the officers involved in plotting our strategy. "Britain will not leave with its tail between its legs. The thing that's keeping us going is that we understand this is a long-term thing, not something that's a quick fix. We have the mindset that this is a 15-year endeavour."

In fact, the main problem might not be in the fields of Helmand, but in the living rooms of Britain and America. The public must be convinced that the war in Afghanistan is worth fighting.

These observations are profound and well crafted. But, like the death rate, they do not tell the whole story. Much of the absence of media coverage of the events in southern Iraq during the British occupation was, I suspect, not only due to the obsessive secrecy of the MoD, but also because the media was not interested. Furthermore, it was probably not only the media. I strongly suspect that the general public wasn't either.

The mood, as I remember it was that most people simply wanted the Army out of Iraq and, I equally suspect, that the current mood is much the same in resepect of Afghanistan. Thus, Harding's view – which I share – that "the main problem might not be in the fields of Helmand, but in the living rooms of Britain and America," is probably correct, but not for quite the same reason as he postulates.

Hostility of the public to a war is one thing. That can be addressed, harnessed and even turned. But that is not really what is at issue. That, it seems to me, is indifference. Like so many things in life – not least the EU – we do not know, because we do not care one way or another what is happening. That, in the final analysis, is the bigger problem.