Even the "brothers" aren't buying it 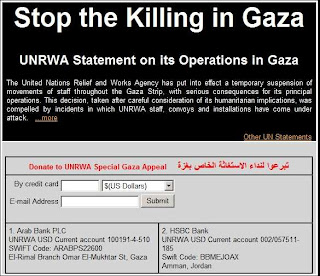 The dhimmi media may be buying into Pallywood, but even the "brothers" are turning away. This is from a Bradford forum:

A sincere, active brother from Bradford has informed MPACUK (Muslim Public Affairs Committee UK) that the MP for Bradford, Gerry Sutcliffe, has had only 2 complaints about Israel! MPACUK asks - are the Muslims in Bradford asleep!? Bradford has the fourth highest proportion of Muslims in England. Over 100,000 Muslims, yet only 2 complaints against Israel! Absolutely disgraceful.

Gerry Sutcliffe is meeting the Foreign Office today. Ring him now before 2:30pm today on 01274 400 007 and ask him to condemn the Israeli invasion and attacks on Gaza. Start complaining now.

But even if you didn't do that its still not too late. Here are some of the things that the sincere, active brother from Bradford has suggested that Bradford Muslims can do. Bradford Muslims if you care about justice, please heed his words:

"There were 3000 people protesting in the Bradford March, yet how many have contacted their MP or MEPs?

This Saturday, 10th Jan, are the surgeries of Terry Rooney and Gerry Sutcliffe. The people of Bradford should go to the surgeries and express their opinions, if possible sign petitions and present them.

It is the job of MPs to represent their British constituents not the interests of Israel, many MPs are putting the views of Israel over and above the views of British people - is this democracy??

MPACUK should ask Muslims around the UK to do this in all cities, this should be happening across the country.

What is also interesting is that, unlike 2006, the UN resolution passed last night is having no political traction at all. This is possibly because the UN has abandoned all pretence at neutrality and is now so obviously partisan that even its tarnished credibility is being shot to pieces. 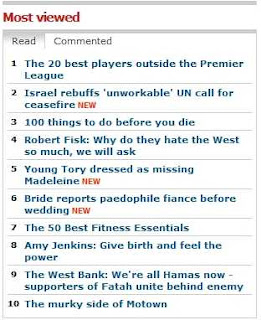 When it becomes the prime propagandist for the Hamas message, even though the media lap it up, the shadow of Qana looms large, with the spirit of "Green Helmet" all too evident.

But, it appears, you can play the "ghoul card" once to often. In its quest for "another Qana", Hamas tactics - even with the willing help of the UN - are all too transparent, leaving the MSM and the tranzies as the only apostles of their homicidal creed. Even leftoid readers of The Independent find "The 20 best players outside the Premier League" more interesting than the UN resolution (pictured).

As regards the UN, it would be a delicious irony if that organisation, supposedly dedicated to peace, but now joined in common cause with the murderous Hamas to destroy Israel, should itself be destroyed the cause it has taken up. Soon, we will have to insist that its own mercenaries should swap their blue helmets for green helmets. The final transition will then be complete.