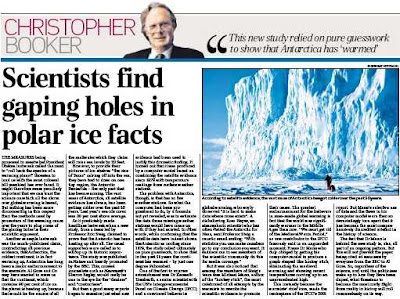 The warmists are getting desperate. As their edifice of "global warming" crumbles like ice sheets calving in the summer, they have gathered their forces and summoned up the remaining tatters of their credibility, assaulting what they feel an insult to their creed – the obstinate refusal of the Antarctic to warm up.

As recorded by Booker today, they have secreted a "paper" into their propaganda sheet, the Nature magazine, claiming that, contrary to all previous evidence, Antarctica is indeed warming up,

In a carefully planned coup, they then spread their tidings of joy to the believers through their media groupies in the BBC and elsewhere. The news had Newsweek's Sharon Begley, whooping with joy, crowing that this would really be one in the eye for the "deniers" and "contrarians".

The study, however, from a team led by Professor Eric Steig, immediately began to attract a good deal of attention from real experts. They quickly found that the conclusions had been produced by yet another a computer model. This one relied on combining the satellite evidence since 1979 with temperature readings from surface weather stations.

The problem the Steigists were confronting was the irritating shortage of weather stations in Antarctica. But, with their magic computer, using an equally mysterious formula, they have conjured up "estimates" to fill in the blanks left by the missing stations. By this magical, mystery process they have managed to show that, if there had been ground stations present, they would have shown that the continent was warming and not cooling – thereby completely contradicting the real data produced by satellite.

Even then, they are struggling, their alchemy stopping short of producing huge leaps. All they have managed to do is come up with a 50-years increase of just one degree Fahrenheit, smaller than the margin of error which they allocate to their own work.

But, while they have been able to rely on their media groupies to lap it up, they have not been able to convince their own. One of the first to express astonishment was Dr Kenneth Trenberth, a senior scientist with the UN's Intergovernmental Panel on Climate Change (IPCC) and a convinced believer. He wryly observed "it is hard to make data where none exists".

Actually, it isn't – not when one of your team is Michael Mann, author of the infamous "hockey stick", someone who has made a career out of inventing and then manipulating data. He is the "scientist" who, at the behest of the IPCC, managed to lose the Mediaeval Warm Period.

Another disbelieving scientist is Ross Hayes, an atmospheric scientist who has often visited the Antarctic for Nasa. He sent Professor Steig a caustic email ending: "with statistics you can make numbers go to any conclusion you want. It saddens me to see members of the scientific community do this for media coverage."

The fact, though – says Booker, that Dr Mann is again behind the new study on Antarctica is, alas, all part of an ongoing pattern. But this will not prevent the paper being cited ad nauseam by everyone from the BBC to Al Gore, when he shortly addresses the US Senate and carries on advising President Obama behind the scenes on how to roll back that "spectre of a warming planet".

Therein lies the problem. Idiot politicians unthinkingly imbibe a creed, the scientific credentials of which wouldn't even pass muster amid a gang of Druids praying to their sun god, or whatever it is they do. Until these politicians finally wake up to how they have been duped, what threatens to become the most costly flight from reality in history will continue to roll remorselessly on its way.

If they do not, of course, the tumbrels will roll. That, on the face of it, might even be preferable.