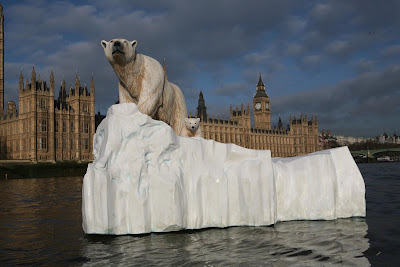 In a bleak reminder of the peril which faces the planet, a stranded female polar bear and her baby cub were seen on one of this winter's icebergs as it floated on the Thames past the Houses of Parliament yesterday.

Faced with this reminder of the disaster of global cooling encroaching on the planet, one worried Londoner, according to The Sun remarked "Surely it’s not that cold!?"

This was precisely what concerned Parliamentarians were asking themselves last October as they sat in the chamber of the Commons to pass the Climate Change Bill, gazing at their Blackberrys which brought them the news that it was snowing outside.

Mr al-Gore too is about to confront this shocking evidence of "climate change". He is scheduled to testify before the Senate Foreign Relations Committee in Washington on Wednesday morning. A "Winter storm watch" has been posted for the nation's capital, with three inches of snow forecast for Tuesday night. Legislators are now anxious to hear al-Gore's plans to combat this dangerous climate change … if they can get there through the ice and snow.

Even more evidence of this dangerous phenomenon comes with the appointment by Obama of ice-queen Hillary Clinton as "special envoy for climate change".

Her frigid demeanour will indeed send "an unequivocal message that the United States will be energetic, focused, strategic and serious about addressing global climate change," as her former hunting ground, New York, braces itself for five inches of snow.

Fortunately for Londoners, the iceberg floating up the Thames was artificial - a stunt to advertise a satirical television channel called Eden - a new digital TV enterprise, part-owned by the BBC - which last night broadcast a spoof claiming that the ice caps are melting.

Broadcaster and eminent wildlife conservationist, Sir David Attenborough, entered into the spirit of the joke, saying: "The melting of the polar bears' sea ice habitat is one of the most pressing environmental concerns of our time. I commend Eden for highlighting the issue; we need to do what we can to protect the world's largest land carnivores from extinction."

Next week, the team are to float their "iceberg" in Hampstead Heath pond - a well-known habitat of polar bears - where the local pond life can visualise the damage done as the ice sheets creep further southwards.

We are so lucky that so many people are devoting their time and energies to warning us of this impending disaster, and preparing for it.