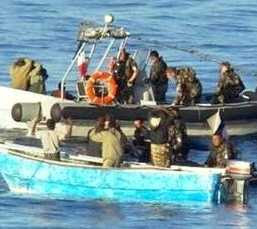 As the EU Navee sails the seas, under the codename Operation Atlanta, Ann Winterton has asked the Secretary of State for Defence whether all vessels comprising the EU "fleet" under the command of Rear Admiral Phil Jones fly the European Union flag. She also wanted to know from what position the flag is displayed on each vessel.

Bob Ainsworth replied for the MoD, giving a rather odd reply. On 3 December, he said, "the EU Force Commander of Operation Atlanta issued an instruction to the EU task force that all vessels in the force should fly the European Union flag in addition to their national ensigns."

The EU flag, he then informs us, will be flown from the yard arm; this is the position in which the NATO flag would be flown if the vessels were participating in a NATO operation. National ensigns will continue to be flown from the number one position on the stern or main mast.

So, why is Admiral Euro Phil issuing instructions to all these happy little ships to deck out with the poisonous ring of stars? Mind you, didn't they used to hang people from the yardarm? When the flag goes down on our boat, can Euro Phil go up?

The pic, incidentally, shows the euro-chaps happily at work, and not an EU flag in sight. To compensate, no doubt Admiral Euro Phil has told them rig their iPods to play "Ode to Joy". But, since they are there, a thought occurs. Given the collapse in shipping prices, instead of trying to stop these poor Somalis stealing merchant ships, might it not be a better idea to give them the odd bob or two to take a few of them off our hands?

Perhaps that's what the chaps are really doing.