Agents of influence and useful idiots 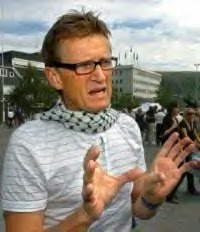 My colleague has already outlined in what way the propaganda news coverage of the present war in Gaza is different from that of the 2006 war against Hezbollah in Lebanon. There is much prattling in the media about the Israelis learning military lessons from the earlier engagement. Maybe so, but what the Israelis have clearly learnt is the need to bypass the so-called main stream media and to put out as fast as possible their own story for the world to see.

In other respects we can safely say plus ça change, plus c'est la même chose, not least in the selection of "experts" that the media indulges in. Our attention has been called by a number of people to the ubiquitous presence of a Norwegian doctor, Mads Gilbert and his colleague Erik Fosse.

They entered Gaza on December 31 and have, according to Dr Gilbert, been performing operations day and night on an ever larger number of casualties of whom an ever larger proportion are definitely innocent civilians. This miraculous behaviour does not appear to have prevented Dr Gilbert from appearing on every Western TV station with a frequency that makes one wonder when exactly he has time to do any operating.

Camera.org (Committee for Accuracy in Middle East Reporting in America) has the story on the good doctor and his colleague. He is a long-standing member of the political Red (Rodt) party, a revolutionary socialist party in Norway and has expressed his view on numerous occasions that medicine cannot be separated from politics. He is a long-standing supporter of Hamas and, indeed, of any terrorist organization, who told the world in 2001 that the attacks on the United States were justified. This is the man the Norwegian government subsidizes and the world media listens to.

Not all is lost, however. Thanks to Power Line, which has a good posting on that UNWRA school, we also have the story of France2 (the TV station involved in the infamous Mohammed Al-Dura case) admitting that ... ahem ... they made a mistake in some photographs they displayed prominently.

It would appear that the dead civilians and Hamas operatives got to be that way because of a truck with explosives detonated in 2005 in a refugee camp and not because Israel bombed the place in 2009. I suppose, as we were told during the row over Qana, they are dead and that's what matters. How and why are luxuries.

Here is some more reading matter: a fascinating analysis of what might well be the Israeli strategy in the Jerusalem Post and another stonking article by Christopher Hitchens. The man specializes in giving no comfort to anybody. Even if one disagrees with much of his analysis, the article is well worth reading.