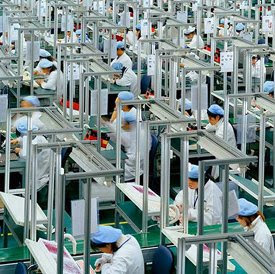 This blog has been pretty consistent in maintaining that the Chinese "economic miracle" is not all that it has seemed and that the country, economically and politically, has been on the brink for some time.

Despite some pundits suggesting that China would weather the global downturn, evidence now coming in suggests that China's vast manufacturing sector is on the brink of technical recession. Order books have emptied and once humming factories are falling silent.

This "bleak snapshot" comes via the manufacturing purchasing managers' index (PMI), a survey produced by CLSA, the Hong Kong brokerage. Over the past 12 weeks, says The Times which carries details of the survey, "it has painted a far more rapidly worsening picture than anyone predicted." China, it adds, has proved its "unexpectedly high vulnerability to the global financial crisis."

Unexpected by some – but not by this blog. And the signs are indeed bleak. Output has contracted at a record pace, employment fell for the fifth month and work in hand has declined. Five back-to-back PMIs are signalling contraction. The manufacturing sector, which accounts for 43 percent of the Chinese economy, is close to technical recession.

The political implications are also bleak. The Communist Party's political legitimacy depends heavily on its ability to maintain improving economic conditions and is, in a sense, hostage to its huge populations which, prone to rioting, could tear the government apart. 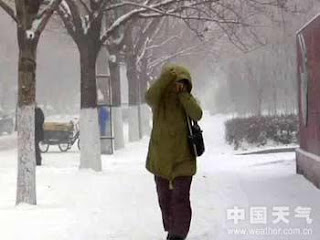 Even then, we do not have the first idea of what is happening in the agricultural sector, or the outlying provincial towns, but it takes little imagination to work out that, if the major industrial centres are having hard times, there must be knock-on effects right through the country.

The bad weather last year did not help, when heavy snow and rain - the worst in five decades - hit southern China in January and February 2008, resulting in deaths, structural collapses, blackouts, accidents, transport problems and livestock and crop losses in 19 provinces.

Already bad weather had come to southern China and a repeat of the winter conditions experienced last year could add further stress to the political and economic systems.

Where this will all lead is anyone's guess. China is now part of the wider global economy but no one can predict how its government will react if its seriously threatened by internal dissent and unrest. The country is, in a sense, the wild card in a pack that already has too many jokers.