A defence of defence? 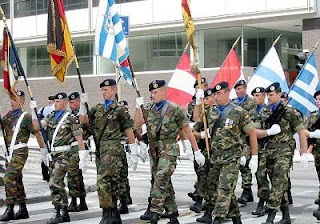 Liam Fox, Conservative shadow defence secretary, writes in The Daily Telegraph arguing that "Gordon Brown is misleading the nation by claiming that the EU does not affect defence policy."

You can read it if you wish but this is no great attack on the EU and its ambitions for a European Army. Instead, Fox confines himself to an attack on the "safe" subject of the Lisbon Treaty. His substantive (if you can call it that) argument, therefore, is that "Gordon Brown was wrong when he told the House of Commons recently that it 'in no way affects our defence policy'".

Fox is also playing silly games, claiming that, through the Lisbon Treaty, "the EU will get a foothold in our defence policy for the first time." It actually gained that through the Maastricht Treaty which, if memory serves me right, was approved by a … er … Conservative government. Once again, we see the Conservative opposition to the EU starting and finishing with the Lisbon Treaty. Everything else is off-limits.

Thus, what is far more interesting is a comment on the piece from "Jose M. Barroso", in the following terms:

The time to stop this happening was fifteen years ago under the collective heading 'Maastricht' and the anti-democratic detritus parasitically attached to it - a test of strength and trustworthiness your party comprehensively, miserably failed, with the honourable exception of a small number of MP's in your party.

You want us to trust the Tories on defence - in particular after Clarke's axe fell on them in the 90's? Here's a test for you - make a new year's resolution, insist that the effete child currently 'opposing' Alistair Darling mentions the words 'Aircraft Carriers' and 'funding' in the same sentence as early as possible in 2009. The absence of such commitments thus far merely underlines the lack of credibility your Party holds with regard to National Defence. It was your party surrendered Britain to this EU. Don't try to lecture us on its manifest and inbuilt inadequacies now.

You can see why the Tories have a problem. We pointed that out in February 2007, so we need to go further than just stopping this one treaty. To have any effect, we need to go right back to the Maastricht Treaty – something, of course, that Liam does not mention.

Nor does Liam particularly want to be reminded that, when British membership of the European Defence Agency (about which Liam Fox now rails) was put up to the House of Commons, the Tories joined with the government in nodding it through.

What do you think is going to happen?