No port in a storm 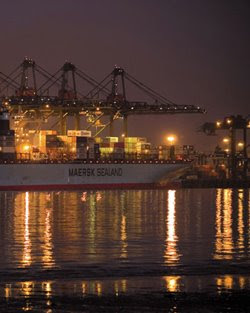 Forget anything the politicians tell you about the duration of this recession. The same goes for the financial pundits. Look at the evidence.

A piece by the gifted Ambrose "Armageddon" Evans-Pritchard in The Daily Telegraph is a good place to start. He has a romp round the shipping scene, telling us that "freight rates for containers shipped from Asia to Europe have fallen to zero for the first time since records began." This, he writes, underscores "the dramatic collapse in trade since the world economy buckled in October."

Ambrose cites the shipping journal Lloyd's List, which says that brokers in Singapore are now waiving fees for containers travelling from South China, charging only for the minimal "bunker" costs. Container fees from North Asia have dropped $200, taking them below operating cost. An "industry source" says they have never seen rates fall so low. "This is a whole new ball game," adds one trader.

We also get a reminder of trade data from Asia's "export tigers", which is dire, reflecting the collapse in US, UK and European markets. Korea's exports fell 30 percent in January compared with a year earlier. Exports have slumped 42 percent in Taiwan and 27 percent in Japan, according to the most recent monthly data. "Even" China has now started to see an outright contraction in shipments, led by steel, electronics and textiles.

Lindsay Coburn, an ING trade consultant, says: "This is no regular cycle slowdown, but a complete collapse in foreign demand." Idle ships are now stretched in rows outside Singapore's harbour, creating an eerie silhouette like a vast naval fleet at anchor. Shipping experts note the number of vessels moving around seem unusually high in the water, indicating low cargoes.

Ambrose thus tells a great deal, but there is even more to the picture. The online trade magazine Purchasing.com points to the "dramatic decline in ocean container shipments from Asia", but it also notes that year-over-year cargo volume in major UK container ports fell 7.1 percent in 2008. By December last, it had seen 17 straight months of decline.

That confirms what many already knew – that this recession has been going on a lot longer than the headlines (and the pols) would have it. "Longer" and "deeper" are now the watchwords, and very much slower to recover.

Denmark's AP Moller-Maersk, the world's largest container line, is of like mind. According to Reuters, Maersk chief executive Nils S Andersen (speaking in Singapore rather than here) thinks the shipping industry is unlikely to recover before the end of next year. The outlook for the industry is "very tough". Shipping lines have cut staff and mothballed ships to cope with over-capacity and falling trade volumes as more economies fall into recession, depressing demand for goods.

From the sublime to the … local. The Grimsby Telegraph is telling is that the Immingham "shipping giant" DFDS could be poised to shed 10 percent of its 700-strong workforce. A total of 71 jobs are at risk in Grimsby, "following a rapid fall-off in cargoes, particularly in the automotive, steel and construction materials sector."

That is a sign of the times. Added to the rest – considering that so-called "globalisation" has been driving the global economy for more than a decade - and the situation looks more than a little bit unhappy. Worse still, taking the cue from the trader whom Ambrose cites, we seem to be in unerforschtes gebiet.