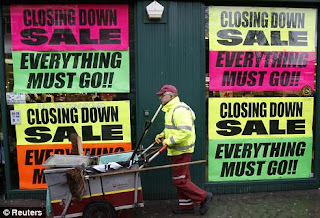 Ho hum! The dead tree media is exulting in the admission from Gordon Brown on the Today programme that he never saw the recession coming. "We believed," he said, "there was a possibility of institutional failure in the banking and financial system so we did all sorts of exercises, simulation exercises. But what we didn't see, and nobody saw, was the possibility of complete market failure, that markets seized up across the world."

This is against the background of official recognition that the economy shrank 1.5 percent in the last three months of 2008. That "plunge", says The Daily Mail, cited as "the largest since April to June of 1980," has "outstripped experts' forecasts by 0.3 percent and fuelled fears the recession will be long, deep and very painful."

Alistair Darling has also joined the ranks of the "new blind", admitting the downturn had been "sharper" than expected. In his Pre-Budget report in November, he predicted the economy would grow in the second half of 2009 and between 1.5 to two percent in 2010. The official forecast is now for a decline of 0.75 percent to 1.25 per cent in 2009.

Meanwhile Lord Turner, chairman of the Financial Services Authority has piled in, accusing Brown of failing to spot that that the credit and housing boom had left the economy "fraught with systemic risk". He suggests Brown has to take his share of the blame. But Turner also says that "finance ministers" across the world are to blame for failing to identify the dangers of sub-prime mortgages and soaring debt.

And now "experts" fear growth could slide two per cent of even three this year in what would be the biggest economic decline since World War II.

However, all is not lost. According to The Telegraph, Brendan Barber, general secretary of the TUC, is blaming bankers and previous Tory governments for the economic mess. "This recession," he says, "is not bad luck or an inevitable swing of the pendulum. Its cause is irresponsible behaviour by banks and financial institutions taking advantage of the deregulation started by Mrs Thatcher and President Reagan, and continued to a greater or lesser extent ever since."

Somehow, it was always going to be that. Tory "deregulation" is always the source of all ills, and pinning the blame will, of course, herald and legitimise calls for more regulation. But, it appears, when our masters are totally blind, they might have a little difficulty reading any new rules, much less understanding them.

What was that about the land of the blind?