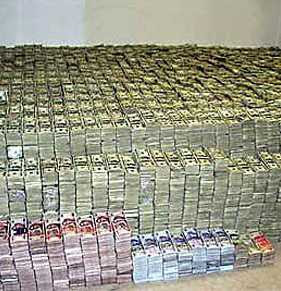 Picked up by The Daily Mail is the staggering story that the bill for membership of the European Union will increase by nearly £4 billion, because the collapse of the pound's value against the euro.

According to figures contained in the smallprint of Alistair Darling's Pre-Budget Report last November, Britain's net contribution to the EU will be £4 billion in 2009-2010. In 2010-11, this will increase to £6.5billion. But the chancellor calculated the figures when £1 was worth 1.4 euros.

The same story was picked up earlier by The Independent which adds a small but vital detail. When determining the exchange rate at which we pay our EU bill, this is set for the forthcoming year at the end of the previous year. Thus, even if the pound recovers some of all of its value – which it most likely will – we are still lumbered with this additional cost.

This, of course, is real money. It has to be found by the UK taxpayer, if not now, through borrowing that will have to be paid-for sooner or later. And, if Mr Brown's government cannot raise the money, then something (or many things) will have to be cut to pay the bill.

The sum, incidentally, is about the same as we would eventually have to pay for our new carriers. Since these would be (and in fact already are) pencilled in to join the EU Navy, we might just as well cancel them and let the EU buy its own carriers.