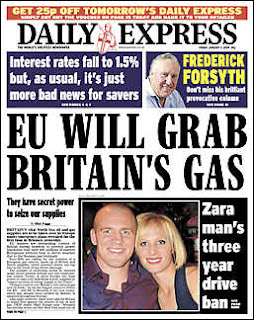 The Daily Express is on the case today, headlining a warning about the EU's attempts to grab control over our energy supplies.

The threat is real, albeit ill-defined and lies essentially in the UK government's propensity to roll over for its tummy to be tickled every time the EU says "boo!". In other times, it would have been called appeasement. Now it is still appeasement, although there is no opposition in our toy parliament which is prepared to call a spade a spade.

What is intriguing is that the EU is probably as much motivated by desperation as it is political ambition. The member states, having let themselves be sidetracked by their obsession with global warming (to call a spade a spade), have neglected energy security in the fond but entirely unrealistic hope that Russia would be there to bail them out and protect them from the consequences of their folly.

The nature of the EU's predicament is nicely spelt out in a recent edition of Newsweek. In an article headed, "Russia's Big Energy Secret," it tells us that, far from being the universal supplier of endless energy to the shivering Europeans, Russia itself is short of gas – having enough only to supply its own domestic market.

In order to export gas to the European, Russia is having to buy gas from central Asia, its wealth arising from the mark-up it is putting on the gas as it passes through its territory. Now, however, the Central Asian republics are seeking to do direct deals with their own customers – China in particular – cutting Russia out of the loop and leaving it short.

The current dispute between Russia and Ukraine, therefore, it not entirely the "bilateral" issue that Barroso would have us believe. There are undercurrents here which threaten the entire European energy strategy. And Barroso knows it. This is why he is bluffing his way into an urgent "European solution".

At the heart of that is the doctrine of "sharing the pain". If Europe is to go short of gas, we should all go short, rather than have some member states still burning while others freeze. The idea is, of course, cloaked in Euro-rhetoric, but that is what "solidarity" actually means - if one freezes, we all freeze.

Britain, nevertheless, has problems of its own. With its energy policy a shambles, electricity power cuts looming and an over-reliance on gas for electricity generation, it is in no position to help out the freezing Euro-weenies. Thus, Barroso either needs to be able to blag his way into convincing the UK to sacrifice itself pour les autres or he must wait until the constitutional Lisbon treaty is ratified.

The powers Barroso needs were in the original constitution and they are still there in Lisbon, with which he can finagle a deal using qualified majority voting that will strip away Britain's control over its own energy reserves.

The only good thing here is that our energy policy has been so mismanaged that, by the time the "colleagues" get their way, Britain will have very little to give. Thus, when we come to sit in the dark, freezing cold, with our generators idle, we will at least have the small comfort of knowing that much of Europe will be in a similar condition – except of course France, which can rely in its nukes.

That apart, one can almost see the merits of a "European solution", if it means exporting the consequences of our own mismanagement to the continent. Added to theirs, this should make for a formidable combination which, very rapidly, should ensure the downfall of the whole shooting match. If there are no atheists in the trenches, there is no apathy when the lights go out.

Horse-drawn tumbrels will, by then, look to be a very attractive proposition.