Russia, Georgia and the EU 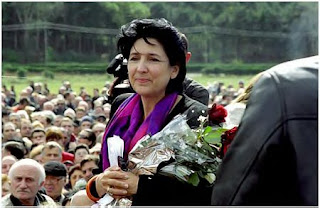 There are few things more irritating than listening to instructions on what the EU should be doing from people who clearly do not know the first thing about that collection of institutions. For once I am not talking about Conservative politicians and wannabe politicians but about the former Gergian Foreign Minister, Salome Zourabichvili, who gave a talk to the Henry Jackson Society this lunchtime, entitled "Russia and Georgia: The problem Europe would rather forget".

Nothing wrong with the second part of that title except for the exclusivity. "Europe" would rather forget about most problems, internal or external.

As it happens, Ms Zourabichvili's biography does not inspire one with any sort of confidence in her solid judgement but, at the very least, as a former member of the French foreign service (even while Foreign Minister in the Georgian government, which must have raised questions of conflicting interests) she ought to know a little more about the European Union.

It is possibly her Francophile background that prompts to castigate the outgoing American Administration as having harmed Georgia more than most people realize and expressing some certainty in the incoming Administration (just as soon as it gets over the lengthy inauguration festivities).

According to Ms Zourabichvili the EU has certain responsibility towards Georgia, Ukraine and other "neighbourhood" countries, especially as the new American Administration is likely to concentrate on other matters, such as Iraq, Afghanistan, Gaza, the economy and so on. How she knows this is a mystery but her point that the EU ought to make it clear that "European" countries are its responsibility and the US can rely on its allies is a good one.

At least, it would be a good one, if one did not immediately recall the last time the then EC announced just that. "This is Europe's hour," - said Jacques Poos ofLuxembourg, then holder of the rotating presidency. He was talking about the disintegrating Yugoslavia and a right mess the EC/EU made of it. Perhaps, Ms Zourabichvili does not recall those days, despite being a high ranking French diplomat at the time.

The EU, according to her, has various other responsibilities. There are those 300 observers, whom Russia appears to accept while getting rid of the OSCE ones and probably closing down the UN mission quite soon. One can't help wondering why Russia thinks it has no particular difficulty with the EU keeping its observers there while refuses to countenance the OSCE.

One or two things the former Foreign Minister did not mention. The word NATO did not cross her lips. Neither did she refer to the fact that the Russians have broken the agreed cease-fire several times, despite the EU resuming the Partnership and Cooperation Agreement talks early last December. Could there be a connection between that event and the benign attitude with which the Russian government views the EU observers? And might this benign attitude not change if the 300 temporary observers are turned into some kind of a permanent EU presence, as Ms Zourabichvili suggested several times in her talk?

Much of the talk was taken up, as I said at the beginning, with advice on how the EU could make its interests in the area clear to Russia, thus forcing the latter to make its interests clear. She does have a point - it is not entirely clear what Russia has gained from that incursion last summer and from acquiring two more South Caucasian autonomous republics. Unless, of course, the whole episode was directed at the domestic audience, whipping up its fears of the enemy that is all around them and, even, inside the country.

The point is, the former Foreign Minister repeated several times, that the EU must make its interests clear in order to make people understand what its foreign policy is. Well, dear former Foreign Minister and French diplomat, that is the basic problem. The EU has no single set of interests anywhere, has no real policy towards its neighbours or near-neighbours and that is why there can be no EU foreign policy, no matter what the French President may pretend. You see, dear fFM&Fd, however hard President Sarkozy (and his predecessor) may try, nobody apart from the French and members of the State Department believe that French and European foreign policies are identical.

The EU, according to Ms Zourabichvili, is in a good position to help develop democracy in the two authoritarian states, Russia and Georgia, though the latter is probably more susceptible to the idea (especially if Ms Zourabichvili finally acquires some political support in the country, one assumes). Apparently, she labours under the misapprehension that the EU is a democracy as well as an organization that has certain interests.

Sadly, as soon as the Georgian crisis was over the European consensus (by which, I think, she meant French policy) disintegrated and Russia once again finds herself dealing with individual countries separately. This must be overcome.

Interestingly, Ms Zourabichvili proudly proclaimed that the supposed weaknesses of the EU are, in reality its strengths. These are a more pragmatic attitude to international affairs, diversity of opinion and lack of military prowess. In other words, complete lack of integrity, no common ground and no real ability to back up its demands or requests, should these materialize.

I think it is time Ms Zourabichvili came back to where she belongs: the French diplomatic service.
Posted by Helen at 15:44