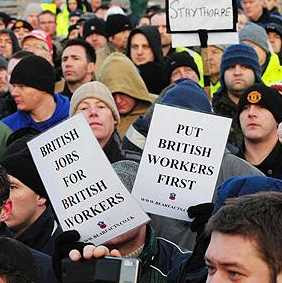 Amazingly, it is The Independent which is giving the elephant in the room its outing, telling us that the British strikers "protesting against the use of foreign workers" are up against one of the basic principles enshrined in European Union law. The piece, however, is a cut-and-paste from the Press Association's Geoff Meade.

He tells us that when the UK joined the then Common Market in 1973, "the country" (which does not, I hasten to add, include me) accepted the right of nationals of any other member state automatically to live and work in Britain. However, at that time "there were only eight other member states, all of them prosperous and unlikely to trigger mass migration to the UK to look for jobs."

And so it goes on, all Janet and John stuff but it's good to have the Europhile luvvies of The Independent given the facts of life every now and again. The very fact that the paper allows an EU dimension to be recognised is at least a start.

The Daily Telegraph is on the case as well, top of the list currently on Google News, reporting that nuclear power workers are poised to join the "growing wave of industrial unrest". Yesterday, more than 3,000 oil and gas workers walked out in protest at against construction jobs going to foreign workers.

As well as Lindsey, which started it all off, at least 12 other sites including refineries, power plants, gas terminals and chemical plants staged demonstrations on yesterday. More than 1,500 workers staged unofficial walkouts at six sites in Scotland in support of the dispute. There were also demonstrations at the Wilton refinery on Teeside, the Milford Haven natural gas terminal, Pembrokeshire, and the South Wales Kilroot Power station in County Antrim.

In the Guardian we see the walkout described as a protest against the "victimisation of the British worker", although it seems there were a lot of British workers there, gainfully employed. Most of them had blue uniforms and these ghastly yellow hi-viz jackets on, though. I guess they will be finding a lot of work to do as this recession develops and people finally realise quite how badly they have been betrayed.

Nevertheless, union organiser Bernard McAuley doesn't seem to have got the point when he addressed workers in Lindey, clambering on to a flatbed truck to tell them that it was "wrong to ship in workers from the continent when north Lincolnshire had plenty of unemployed builders who could do the job." That is what the EU is all about, chuck. You ain't got any rights any more, at least no more rights than the itinerant Latvian who is wants to drop in for a job.

That, actually, is the issue. If a nation is to mean anything, it means being able to control access, and our government (accountable to us) to decide who can come in and work, and who cannot. It is not the principle of whether foreign workers should come in and take jobs. It is that our now provincial government has no control over the matter.

A leader in The Times has a go at this, castigating Brown for his facile "British jobs for British workers" slogan coined in 2007, telling us that, "the UK is bound through membership of the European Union to welcome workers from other EU states."

It then goes on to tell us that "it is economically illiterate to suppose that domestic living standards and employment are damaged by the free movement of labour." Yea, right! Tell that to the guys at Lindsey who are looking at foreign workers taking up "their" jobs.

Whatever the economic arguments, they are going to be hard put to accept that the advantages for the employer in hiring labour at the lowest price possible are going to spill over into the broader economy and benefit them.

And, if there are no controls at all, what happens when the whole British labour force is on the dole, while the jobs are done for foreigners - except for those chaps in yellow jackets? Who buys then buys products and pays the taxes?

In this context, the Daily Mail quotes Derek Brassington, 54, a steel erector from Chesterfield. He has worked refinery industry for 30 years and was near the front of the crowd at the Lindsey refinery.

"We're here because we're fighting for our livelihoods," he says. "Everybody is worried about the future and about how they're going to support their families. How am I going to support my wife in these circumstances? We're all skilled workers and the fact that we have a company that has decided to pass over us British workers and bring in workers from Italy - in the current dire economic climate - just beggars belief. Something has to be done."

Somebody should give Mr Brassington a copy of The Times and tell him to his face that he is "economically illiterate". That should make some work for the chaps in the hi-viz yellow jackets. But it is quite obviously to the greater good that Italian workers, who clearly have cheaper wives, should come first. Mr Brassington should stop being so selfish.

The only thing is, I wonder what sort of piece The Times leader writer would go for if Mr Murdoch decided to fire all the newspaper's staff and hire in some cheaper foreign labour. Come to think of it, what would he say if we outsourced our government to a foreign country, like er … Belgium.

Woops, we've already done that. But the difference is we still pay the displaced workers. Now there's an idea for Mr Brassington. We get the foreigners to do the real work, pay ourselves inflation adjusted salaries and pensions and pretend we are still gainfully employed.

Or would that be "economically illiterate"?