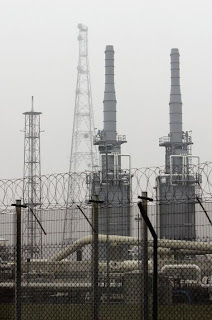 One of the problems about writing intelligently about any subject is that situations which emerge as the hystérie du jour are invariably far more complex than the drive-by media allow for. In many instances, what appear to be the primary issues identified are of less importance and, very often, miss the point entirely.

So it is with the current "gas crisis" over the Russians "turning off the taps" to Ukraine, once again holding Europe to ransom, with the possible knock-on effect of acute supply shortages in the UK. In fact, the chance of the UK experiencing gas shortages by the end of the winter is relatively high, but this has little if anything to do with the Russian action. We take only four percent of our gas imports from Europe, which have very little impact on our supply situation.

For an intelligent (and inevitably long) discourse on the issues, you could do no better than read this, which provides a useful and well-illustrated backgrounder.

The immediate cause of any problem is the continued decline in gas production from the UK continental shelf, but the underlying problem is that UK natural gas consumption has been increasing, primarily because of its use for electricity generation. For the months January through September 2008, consumption increased by 3.9 percent compared to the same period of 2007.

To expand upon this issue, we have, rather fortuitously, a letter from Tony Lodge, which identifies the nub of the problem.

He tells us that, since 1997 the Government has approved over 30 gigawatts of electricity generation from gas-fired power stations. Gas now generates over 43 percent of our electricity. No other conventional power plants, such as clean coal or nuclear, have been approved in this period to boost energy diversity and get prices down.

Further, at present, 90 percent of current and proposed power station construction in Britain is gas-fired. By 2020, 60 percent or more of our electricity will come from gas, 80 percent of which will be imported by pipeline or LNG ship. Gas prices are tied to oil prices and, though low now, will rise again and remain volatile. Thus, observes Lodge, all our energy eggs are in one basket.

The answer, of course, is to widen our generation mix, to which effect Lodge points to the vital need to approve the proposed new supercritical coal plant at Kingsnorth.

The drive-by media, of course, is not interested in such broader analysis, and goes for the easy pickings of the shortage of gas storage. Typical of this is The Mail, which then translates this simplistic analysis into a partisan political knockabout, citing "Tory energy spokesman Greg Clark".

He is thus recruited to say: "As a result of ten years of government inaction, Britain is one of the most vulnerable countries in Europe to turbulence in gas supply. Germany has 99 days of gas storage capacity, France has 122 days, while Britain has just 15 days. As a result, British consumers pay the price because we are more exposed to volatile gas prices than our neighbours."

Then we get the supposedly "killer punch": "The Government has known for years that dwindling North Sea reserves would leave us dependent on imported gas yet has done nothing to make sure we have enough gas storage to protect us from brinkmanship by Russia."

In the manner of things, this is then converted by the drive-by blosphere into "Labour incompetence", and the narrative is now defined. Build up the gas storage and all our problems are over – and it is all Labour's fault for not seeing this.

There is, needless to say, a good deal of truth in any assertion that Labour has been horribly incompetent in the management of our energy supplies, but – as Lodge and others suggest – this does go far beyond the simple issue of gas storage. Furthermore, it is a multi-faceted problem which goes back many years.

These issues must be factored into the equation. But, not only do they go back to before 1997, they currently transcend the party political divide. Not least of our problems is the Conservative support for the "global warming" mantra, its espousal of renewable energy – and in particular, wind power – and its lukewarm approach to renewing our nuclear estate.

How much simpler it is, though, to cherry-pick one aspect of a complex problem, turn that into a political point-scoring exercise and then retire from the field, marking up the points on the scoreboard. But, while this may keep the chattering classes entertained, it does nothing to help the understanding of the problem, or create the political leverage which will get the underlying problem solved.

More than anything else, we must reduce our reliance on natural gas for electricity production, and rapidly expand our coal and nuclear generation capacity. And which politicians are going to be brave enough to say that?