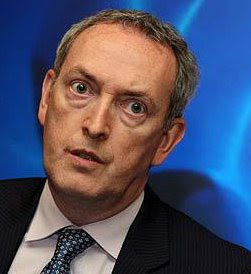 Sometimes the contradictions are impossible to work out. On the one hand, we get the newly appointed defence secretary sounding like a raging Europhile and then we get this.

Hutton is upping the ante on a running sore, the way EU member states are full of pious intentions (that's the polite was of putting it – substitute any phrase you wish) but will never step up to the plate when it comes to putting fighting troops into Afghanistan.

Thus, Hutton is to warn that the failure of countries like France, Germany and Italy to send more troops will undermine European relations with Barack Obama's US administration. "Freeloading on the back of US military security is not an option if we wish to be equal partners in this transatlantic alliance," he will say. He is "pointedly" to tell our European "allies": "Anyone who wants to benefit from collective security must be prepared to share the ultimate price."

The Daily Telegraph, which has trailed the speech, also comes up with a robust leader, declaring: "It is time the rest of the EU played their part in Afghanistan," noting that Hutton's words are "refreshingly undiplomatic."

The paper shares Hutton's frustration with the EU's "shabby performance" but fears that his declaration that "anyone who wants to benefit from collective security must be prepared to share the ultimate price" will continue to fall on deaf ears. Don't expect our leading EU partners to make real sacrifices, it says, concluding, "Doesn't it make their grandiloquent talk about an EU army sound pathetic?"

It does indeed, except that the EU army is not about fighting. Rather, it is just another mechanism though which the EU can achieve political integration. And, for all the strident and welcome words of Mr Hutton – and The Daily Telegraph - that process continues apace, with the EU's puppet parliament yesterday having approved an EU directive "intended to broaden the EU-wide market for defence goods."

This is something about which we have written a great deal, for instance here and here. There are all sorts of implications to this, but the bottom line is military integration by stealth. The EU aims to achieve a victory in the same way that John Reid famously promised we would in Afghanistan – by not firing a shot.

Yesterday's decision brought that the "freeloaders" that bit closer to victory. At least they're being consistent.