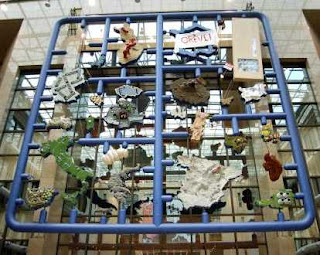 One has to admire the impish sense of humour of Lord High President (Temporary, Rotating) of the EU, Vaclav Klaus, who has commissioned a "controversial" sculpture for the Justus Lipsus Council Building in Brussels.

Recognisable to plastic modellers, the structure is a giant representation of a sprue frame to which model pieces are attached, each piece in the "art" depicting a member state of the EU. All, that is except the UK, which is missing – a space being left where it should be.

The sculpture – for that is what they are calling it – has been created by 27 European artists, each piece "his/her vision of the native country playing with well-known European cliches and prejudices." Thus, the British author has cut out the UK from the EU map to hint at Britain's "dubious relations to the EU."

If real life mirrors fiction, all we can do is look at the UK absent from the line-up and say, "I wish".

Bulgaria, by the way, is one giant lavatory, France has gone on strike and Spain's construction industry has concreted the entire country. Netherlands is submerged in seawater, with just minarets still visible. Italy is represented by a display illustrating its "autoerotic" obsession with soccer and Sweden is a do-it-yourself furniture flatpack.

Meanwhile, you can tell that the euro-elections are on their way. The Conservatives are playing their usual games, pretending that they will do something useful and genuine, as long as we elect lots and lots of their Meps.

To that effect, David Cameron is telling the Financial Times that he will "wreck the EU's Lisbon treaty if he emerges victorious from any early general election in the first half of this year." Since there will not be such an election, Cameron is onto a pretty safe bet that his bluff will not be called. But it makes him sound nice and tough, just in time for the voters to come flocking out for the euros.

Cameron also has ideas for the provincial assembly in Westminster. He says he has plans to axe more than 60 MPs if the Conservatives win the next election, reducing the overall 650 by as much as ten per cent.

Dave thinks that "the House of Commons could do the job that it does with 10 percent fewer MPs without any trouble at all." His is, of course, dead right. But, since 80 percent or more of its work is now done by Brussels, he should be looking for a much bigger cut. Given the impotence of the institution, some might even suggest going the whole hog.

Perhaps, in that context, we got Vaclav Klaus's sculpture wrong. The missing space does not represent the absence of Britain. Merely, it depicts how much power will be left to our toy parliament when the EU has finished integrating us all.