Another ride of the Valkyrie 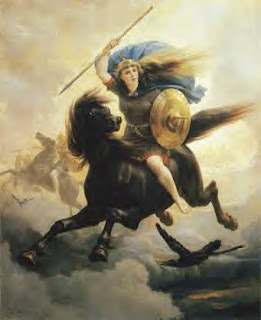 Though I have no intention of seeing “Valkyrie” the latest film about the Second World War, there is the odd thought in my mind that it would be entertaining to find out how Tom Cruise manages to play the ultra-aristocratic German Graf von Stauffenberg, the leader of the July plot to assassinate Hitler.

Anyway, everybody knows about that Graf von Stauffenberg. I was, however, delighted to see that his son, Franz Ludwig Schenk von Stauffenberg, former member of the Bundestag and of the European Parliament, is one of the signatories of a new appeal lodged with the German Federal Constitutional Court that will, at the very least, postpone the signing of the Constitutional Reform Lisbon Treaty by President Horst Köhler.

Four people with neoliberal tendencies – lawyer Markus Kerber, former chairman of the Board of Directors of Thyssen Dieter Spethmann, former EPP-ED MEP Franz Ludwig Graf Stauffenberg and economist Joachim Starbatty - are behind the appeal. Their petition is linked to the judgement delivered by the court in the early 1990s when it concluded that the Maastricht Treaty was in conformity with the country’s basic law and that it would not damage national sovereignty. In a declaration published in the German press, the plaintiffs regard this judgement as erroneous because European integration has led to infringements of the stability pact, to the European Commission going beyond its powers and to a dissolution of the separation of powers. In their view, the Lisbon Treaty will be even worse and will further reinforce this tendency such that the court cannot consider it as constitutionally valid.

Neo-liberal? Hmmm. Not sure his father would have approved of that. But he would surely have approved of his son demanding that Communists should not be represented at the fiftieth anniversary of the July Plot commemoration because of their own totalitarian state.

He got a great deal of support for his stance in Germany in 1994. I suspect that President Kaczynski would have agreed with him if he could be induced to say something nice about any German, particularly an aristocratic one.

But the remaining Kaczynski twin on the international scene is still refusing to sign that treaty, though he is being urged to do so by the the Sejm [link for subscribers only].