A touch of the global warmings 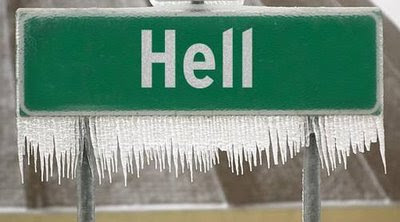 One doesn't know whether to laugh or cry on hearing that RBS has lost £28 bn. I recall not to long ago getting my annual visit from the bank manager to check over my credit-worthiness before he would continue my overdraft. Perhaps I should have visited his bank, to check theirs.

One is slightly less amazed to learn that Britain is to suffer "deepest slump since 1946" and is the worst of the big economies. I think we all knew this - the bit about "deepest" that is – everyone except the "experts" and those wonderful bankers who managed to lose £28billion … including writing off a £2.5 billion debt owed by a Russian oligarch.

Should one then laugh or cry when the egregious Jim Hansen tells the president elect that he has only four years to save the world and that "most estimates of sea level rises are too low conservative - thanks to the accelerating ice melt, rises will be far greater than previously thought."

This is while the "abnormally high level" of sea ice covering the Bering Sea this winter is moving south faster than it has in more than 30 years and is causing problems for the snow crab fishermen. We can certainly laugh while the president elect is turned into a miraculous POTUS, in the Washington driving snow – as long as it lasts. He can lecture his followers on the perils of "climate change" while they freeze in their socks.

Here, also, we have a good covering of "global warming", and Edinburgh airport was closed briefly by the same global warming, which is also closing down parts of Lancashire – not that there are many parts left to close down. And snow is sweeping Ireland, just as the euro goes belly-up and the Irish eyes are no longer smiling. Meanwhile, Hell has frozen over.

The only good thing, it seems, is that "global warming" is becoming an almost universal synonym for snow – measured in feet - while the media are just beginning to take the mick out of Gore, and even the IPCC is getting some flak. Possibly, also, the BBC has developed a sense of humour. It can't be serious about this piece.

So, as we are cold, broke, and the pound plunges to new lows, we can at least all have a laugh, in the certain knowledge that there are some people won'’t get the joke, while others seem to be running out of wind.