Now it's our turn! 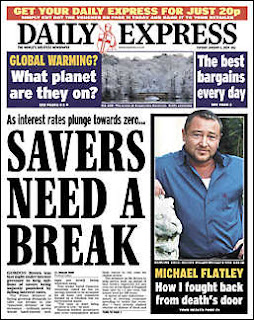 Front page of The Daily Express (pictured) has a banner proclaiming: "Global Warming: What planet are they on?"

This leads you to an inside-page story headed: "The big chill that is here to stay," telling us that Britain's Arctic start to 2009 "showed no sign of abating yesterday as much of the UK was gripped by a mini ice-age." It goes on to tell us that temperatures in some parts of the country were predicted to plunge to a bone-chilling -10C last night with the sub-zero temperatures set to last for much of the week.

We are then told that the winter of 1962-1963 was the coldest in England and Wales since 1740, but "forecasters already predict this January chill could rival that." Last night the Met Office warned temperatures would plummet to -10C in Scotland with the rest of Britain set to shiver through temperatures little warmer than that.

And then we come to the killer line: "The freezing weather," says the paper, "has called into question the notion of global warming."

This line brought our local BBC radio station into the fray, Radio Leeds, which invited me to do a two-hander slot with a rabid warmist from Leeds University (introduced at the last minute, so I didn't catch his name).

Tackling the subject now is really great fun, taunting the warmists. It's the adult equivalent of pulling the wings off flies and watching them desperately buzzing around. "It's weather, not climate," they splutter.

And, of course it is. But hey! Whenever it gets hot, the warmists are right there, preaching their creed of doom. Now it's our turn!