Will there be a break? 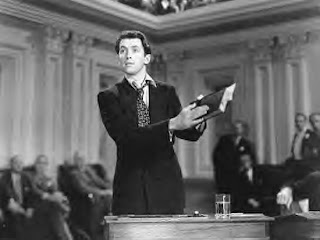 President-Elect Obama sees himself, we are told by the fawning media (as detailed by Sister Toldjah and Powerline), as the new Abraham Lincoln, who was a Republican, the Democrats being historically the party of slavery, Jim Crow laws and segregation. Let us hope that does not mean that he intends to plunge the country into a vicious and debilitating civil war.

He also, clearly, sees himself as James Stewart in “Mr Smith goes to Washington”, the outsider who comes to DC to sort the mess out. How that squares with having been a US Senator for two years (at least nominally), an Illinois Senator for a term and a half and the product of the Chicago political machine is anybody’s guess.

The inauguration of a new President is always exciting and I have watched several in the past on TV, urged by my father to look out for the man with the briefcase that supposedly contained the code that could unleash a nuclear war. As the incoming Commander-in-Chief was sworn in, he maintained, the man quietly detaches himself from the old one and positions himself behind the new one. I never managed to notice the crucial moment and have no idea whether the instructions were accurate.

So what do we have normally? The ceremony, which lasts about an hour and a half, the subsequent mingling with the waiting populace, though possibly there will be less of that this time as Obama is more heavily guarded than any other POTUS in history, and a ball in the evening.

Surely, the day after becomes a working day. This is the President of the most important country in the world we are talking about. Well, not this year. The inauguration period has been extended. Several days, possibly longer will be given to the celebrations, making this inauguration a little like the coronation of a monarch in that old Europe that so many Americans left behind.

At a time when people are steadily being laid off and the economic situation though still not quite as bad as it was in the thirties, is not particularly good and getting worse all the time, this sort of extravagance seems a little de trop. As Sister Toldjah says, even AP has noticed that there is something odd about this and about the Democrat insistence that all of this is justified.

As has become normal with the President-Elect, certain problems have arisen. There is, for instance, the prayer to be delivered during the National Prayer Service the day after the inauguration by the President Islamic Society of North America that has links with the Muslim Brotherhood.

There is a great deal of distasteful tat and schlock around as well as cries for all those who had not voted for Obama (something like 58 million) to support this wonderful new leader and to do so not just because he is the new President but because he is a very special new President. Let’s not forget the yucky new design of the American flag, known affectionately as Old Glory. Well, not for much longer. Glory to Obama, more like. More kitsch described on Pajamas Media. This is beginning to sound worse than royal weddings one has lived through.

And so it goes on and on. This does raise an interesting question. What we know of Barack Obama’s political career so far is that he gets elected sometimes using methods like leaking information about his opponents that had been sealed by the court, and immediately starts preparing for the next campaign, aiming onwards and upwards.

There is no onwards and upwards as of tomorrow afternoon. This is it. He will now be the President of the United States and the next election is not till 2012. Is he trying to extend the inauguration until it is time to start campaigning again? Or is there going to be a break between those events when he actually starts being President?

Some readers of this blog might think that it is not really our business. Well, I don’t know. What with wars in Iraq and Afghanistan, a certain situation in Gaza, Iran being difficult and Russia behaving insanely, not to mention the economic situation in the world, which is not helped by Congress spending like a drunken sailor, the issue is of some importance.

Who is going to clear up when the hangover sets in as it is bound to do?