A dagger in the heart of the economy 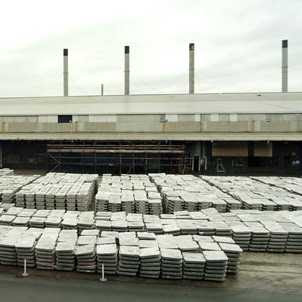 The picture on the left, aluminium ingots produced by the Alcan smelter in Anglesey - represents wealth, real wealth. It is part of the production economy which underpins the whole of our society. And, by next year, it will be no more.

The proximate cause of the closure is the inability of the plant, jointly owned by Rio Tinto Alcan (51%) and Kaiser Aluminum (49%), to secure "a sustainable alternative to the power supply needs of the smelter." Its 255 MW power demand is currently sourced from the nearby Wylfa nuclear power station, which also opened in 1971. But that is to be decommissioned in 2010, and there is no immediate replacement in the offing.

There are other issues, though. The Nuclear Decommissioning Authority (NDA), which owns the Wylfa power station, says it will close in March 2010. A spokesman for the NDA also days, "There's been no breakdown in the relationship between ourselves and Anglesey Aluminium but we have explained to them the situation. "We cannot extend the current contract with them due to new European legislation on providing subsidies to private companies."

And what is that all about?

This notwithstanding, the company management says it had "worked intensively with the UK Government and others" to find an alternative power supply, "but had been unable to do so." That - EU interference apart - is the reality of the Government's failure to deal with one of the most fundamental requirements of a modern society – a secure and sufficient electricity supply.

While it has been pratting around with its obsession with "renewable energy" – with the support, one might add of the Blue-Green Conservatives - pushing the proliferation of useless windmills across the land, it has taken its eye off the ball and let vitally needed supplies run down. This is nothing short of criminal negligence that will cost our economy – and us – dear.

Coincidentally, we learn that "Germany's two largest power companies" have joined forces to announce "an ambitious plan" to build at least four nuclear reactors in the UK … at an estimated cost of £20 billion.

The first of the plants, says The Times "is set to enter service within ten years," the four providing "at least six gigawatts of new generating capacity". That, is (approximately) the equivalent of 10 percent of the generating capacity of all Britain's existing power plants.

Ironically, one of those sites is expected to be at Wylfa, but ten years – or more – is a bit bloody late for Anglesey Aluminium. It will be long gone before the first footings are dug.

Actually, there is something a bit fishy about this current announcement on the new nukes. A venture between E.ON and RWE, which jointly operate three nuclear stations in Germany, this is supposedly setting up in competition with EDF, which recently spent £12.5 billion on its takeover of British Energy and now plans four new nuclear power stations.

What raises suspicions is the E.ON/RWE price tag of £20 billion for 6GW. Not so very long ago, we were looking at the 1650 MW European Pressurised Reactor (EPR), under construction by EDF in Flamanville on the Cherbourg peninsular. At a cost, we are told, of about £1.4 billion, this equates roughly to £1 billion per GW deliverable capacity (assuming a load factor of 90 percent).

Yet, here we have E.ON/RWE quoting £20 billion for 6GW capacity – over three times the price of the French plant. Something here does not ring true. This might be hyperbole, but somehow one gets the impression that the consortium is playing games.

The claim of "ten years" for the first plant to come into operation, in any case, is wildly optimistic. Even aside from the political and other obstacles – and the delaying activities of the greenies – there are formidable problems in getting components sourced as the global queue for nuclear plants lengthens.

Furthermore, if E.ON/RWE need the sort of money they are quoting to build four plants, they are going to have serious trouble raising the cash on the money markets – even if the money is there to borrow.

Either way, today's announcement does not solve anything in the short-term. Where Alcan leads, the rest of us will have to follow, leaving us only to gaze (in daylight hours only) at those soaring monuments to stupidity, otherwise known as windfarms, as the lights go out all over England … and Wales, and Scotland, and Northern Ireland.