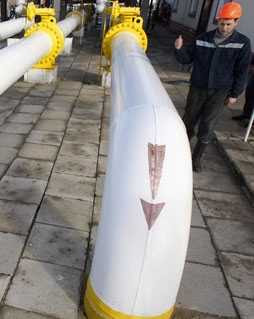 What a lovely word … when applied to that dreadful organisation, the European Union. One takes the International Herald Tribune to be a soft Europhile paper, if you will excuse the pun, and when it starts using that word in relation to the EU, it cannot help but bring a smile.

More than a week after the EU put its credibility on the line by intervening in an energy dispute between Russia and Ukraine, says the IHT, the diplomatic gamble has failed to get the gas flowing – "damaging the prestige of the 27-nation bloc in the process."

One does not then need to follow all the twists and turns of the unfolding drama. It should suffice for us to know that, after "eight days of hectic negotiating," no Russian gas is flowing. "Exasperated Europeans", we are told, are now resting their hopes for a breakthrough on a meeting today between Merkel and Putin, the latter deigning to come to Berlin.

That, in itself, is a snub to the EU. The Czech Republic holds the "rotating presidency" so it should be up front in the negotiations. Dealing with the organ-grinder rather that the monkey, is somewhat upsetting the "colleagues'" sensibilities, even if they would rather the Czechs disappeared into a black hole somewhere. Procedures are procedures, and they must be "respected".

However, while the euroweenies fret about their position in life, the world and the universe, one singular fact is crystal clear. The noble monitors despatched by the Lords of the Universe are confirming that the Russians are "not putting gas into multiple entry points as requested." Furthermore, "they are clearly not providing the level of supply needed for transit."

Cue, therefore, an intriguing piece from the Kyiv Post. Not exactly my daily fare, it obviously carries a great deal of weight, as it seems to agree with what I am thinking. What sterner test can there be?

"To little notice in America" (or the UK, I might add), it intones, "a drama is being played out in Eastern Europe that future historians may mark as the beginning of the end of Russia's neo-imperialist ambitions under Vladimir Putin." Stirring stuff that is, especially when it then lines up some impressive facts. Not least of these is that the spat with Ukraine is "completely bogus". Ukraine has by far the largest gas storage facilities in Eastern Europe, going back to Soviet times when it was the centre of the gas industry. It can easily survive the cut-off for the entire winter season by using its stored reserves.

Thus, the real victims are the half a dozen Eastern European countries that have neither alternative supplies nor large storage facilities and are already in the midst of a dire socio-economic emergency – to say nothing of the EU, which is looking distinctly, er … impotent.

Moving on to tell us that Putin needs the money from gas sales rather badly, Kyiv Post then speculates on why Putin is engaged in "such a crass power play". There, we get some really interesting stuff. Russia and its oil and gas industry, it says, "are in the middle of the economic equivalent of a death spiral, with potentially dire political consequences for the Kremlin." It continues:

It was only six months ago that Gazprom, at that time the third largest company in the world with $350 billion capitalization, confidently forecast that it will become the largest in the world with $1 trillion valuation by 2015. Many a Western banker also nodded in agreement to Gazprom’s other prediction of $250/barrel price of oil in 2009.

As Putin managed to build monetary reserves of $600 billion – the third largest in the world – Russia did look invincible for a time. He also bribed the Russian people into political acquiescence by jacking up salaries and pensions 200 percent since 2000, even though GDP and productivity had gone up barely a third of that.

Alas, we are told – and had guessed as much - it was but a house of cards:

With no industrial production worth mentioning, its infrastructure badly dilapidated, virtually all of its food imported and mortality rates only found in sub-Saharan Africa, Russia under Putin had become a classic banana republic with oil and gas. It lived or died depending on the price of bananas over which it had no control.

You can read more of the detail if you like, but the bottom line is that Russia is stuffed … and not by the euroweenies. With its savings currently being wiped out by creeping devaluation, unemployment spreading rapidly and food inflation approaching 30 percent outside of Moscow, it is only a question of time before people take to the streets.

The "colleagues", it would seem, have staked their reputation, and their energy security, on a loser. No matter how they refine their negotiation strategy – even sending in the dreaded Javia Solana – it looks like they are dealing with a dead parrot … a former parrot, if you prefer. They would be better off going for a peace deal with Hamas which required Khaled Meshal to sing Hava Nagila in the mosque every Friday.

Funnily enough, Andrew Wilson, senior policy fellow and expert on Russia and Ukraine at the European Council on Foreign Relations – one of those "experts" who so impress my co-editor – thinks that the crisis has helped to stiffen the EU's resolve. Methinks, given its current condition, it is not its "resolve" that needs stiffening.

But one can only hope that its affliction is one that even Viagra cannot cure.