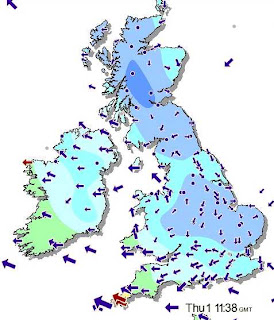 Today is the 10th January. I impart this small but important piece of information not because you, dear readers, are unaware of the date, but in order to make a simple point … that, being the tenth day of the month, it comes ten NINE days after the first.

That was the day when we wrote a piece entitled "Windmills are not for turning", pointing out that the country was effectively becalmed and that the UK was, to all intents and purposes, in a state of no wind generation. The electricity contribution of the windmills disfiguring our countryside was, therefore, zero.

But it is the strap which betrays the mindset. "Britain's wind farms have stopped working during the cold snap due to lack of wind, it has emerged …", the mighty Telegraph intones. There we have it, pomposity and arrogance all rolled up in one. "It has emerged …".

The underlying message, of course, is that it isn't news until the all-knowing Lousie Gray says it is, and the Telegraph prints it. What the paper doesn’t say, of course, it that it has only just noticed something that appeared in its letters column ten days ago, that very letter being one of the triggers of our piece.

More to the point, the fact that wind generated electricity is hugely unreliable, etc., etc., - which la Gray seems just to have noticed – has been aired innumerable times by any number of people. If the media had picked up this point, right at the beginning, then maybe this obsession with wind would have never got established.

The fact is though, that the media – by act and default – still sets the agenda, and it is the little bleatings of the Gray’s of this world that dominate the thinking of the chattering classes. The fact that other people might have said it before, better, longer, and in greater detail, is neither here nor there.

So my complaint? Well, actually, it isn't that small. That we still accord the media so much weight and importance, and that we allow it to set the agenda is a constant cause of complaint on this blog. Only when we get past that, and start setting our own agenda – as the blogsophere in the US is beginning to do – will we escape the tyranny of the media mindset.

And when the self regarding pomposity of "it has emerged …" becomes the object of derision, we will know we are getting somewhere.