It woz the greenies wot done it! 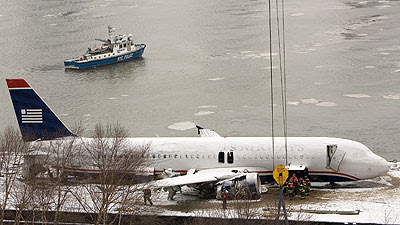 Hats off to Capt. Captain Chesley Sullenberger for his brilliant emergency landing on the Hudson. But now that it is all but official that Flight 1459 hit "a wall of birds", since identified as Canada Geese, consider why there should have been so many in such a critical spot.

Well, according to the New York State government:

Canada geese are a valuable natural resource that provide recreation and enjoyment to bird watchers, hunters, and the general public throughout New York State. But in recent years, flocks of local-nesting or "resident" geese have become year-round inhabitants of our parks, waterways, residential areas, and golf courses, and too often, they are causing significant problems.

But we also learn that:

All Canada geese, including resident flocks, are protected by Federal and State laws and regulations. In New York, management responsibility for Canada geese is shared by the U.S. Fish and Wildlife Service (USFWS), U.S. Department of Agriculture (USDA), and the New York State Department of Environmental Conservation (DEC). It is illegal to hunt, kill, sell, purchase, or possess migratory birds or their parts (feathers, nests, eggs, etc.) except as permitted by regulations adopted by USFWS and DEC.

Way back in 1991, the New York Times was reporting, "Geese Are Multiplying, Thanks to Protection", noting that, "Several weeks into the breeding season, tens of thousands of newborn goslings have been added to Long Island's geese population."

Eighteen years on, the population has reached plague proportions. And, as the New York Post notes, government data show Canada geese are the biggest avian threat to aircraft. They caused $47.4 million worth of damage to aircraft from 1990 to 2007.

In that period, US pilots had reported 1,109 strikes by Canada geese, including 568 that caused serious damage to aircraft - a damage rate of 51 percent. This is far more damage than is caused by other birds. Bird strikes by all species - estimated at 80,000 over the same period – damaged aircraft just 11 percent of the time.

Needless to say, the greenies continue to squeak. In the interests of aviation safety alone, it is about time we had a cull of the greens.

On the other hand, we could go with Boris Johnson's mad idea for an airport in the Thames estuary, where there are some of the most dense migratory bird routes in Europe - one of the reasons why the original Maplin Sands project was dumped.