So, is the eurozone a safety zone? 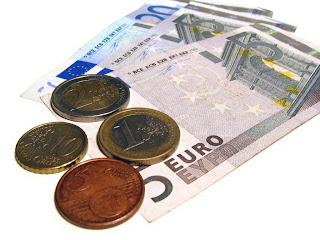 Opinion on the other side of the Pond seems to differ. The Wall Street Journal appears to think that it is, indeed, just that and it will not be long before what they call Reykjavik on the Thames (that would be London, one of the largest financial centres in the world until the EU's financial directives and the determined vandalism of this government destroy it) will see the usefulness of being inside that big tent.

The article disposes of the argument that the present financial crisis and the various governments' twisting and turning may lead to various members of the euro dropping out of the club or, according to some, freeing themselves from a straitjacket.

The thinking of those who believe Greece or Italy may drop the euro goes something like this: Freed of the shackles of a one-size-fits-all monetary policy and back in charge of their own currencies, these countries could devalue themselves out of the crisis, giving their industry a competitive advantage.

But this makes little economic sense. Any benefit from a devalued currency would be short-lived; it would surely lead to wage inflation, thereby neutralizing the advantage for exporters. The pitfalls of leaving the euro, though, would be enormous.

Through various tortuous arguments the article proves to its own satisfaction that countries are safer and more secure inside the eurozone. Not only would they be foolish to abandon it but those outside should really start thinking of joining it as soon as possible. Of course, that argument should apply to countries outside Europe as well. If the eurozone is such a good idea, why don't they all join it?

The euro is an anchor of stability, particularly for small members that otherwise would be much more exposed. Denmark may hold a referendum on joining the euro next year and in Iceland, which hitherto has declined to join even the European Union, a clear majority now favors adopting the single currency.

Perhaps the euro skeptics in the other Reykjavik, the one on the Thames, may soon rethink their position as well.

The trouble with all those majorities that they often disappear when the referendum actually comes round and people are faced with the reality of joining the EU (in Iceland's case and fish is not mentioned in the article at all) or the euro in Denmark's case.

I suspect this may be another effort by Alistair Macdonald, the egregious UK politics, economics and European financial regulation correspondent.

In Europe, after a brief lull, the financial crisis is back with a vengeance. Germany, France and the Scandinavian countries, though stronger, if also ailing, are mounting stimulus programs and building fences around their banks. The peripheral European economies are being left to twist in the market winds.

For many years, countries like Greece, Spain and Italy took advantage of the easy money that came their way. Trade deficits remained wide and governments borrowed up to their treaty-set limits - sometimes beyond.

Now, with the need for stimulus to deal with the severe downturn, these countries find themselves caught in an awful policy bind: credit is available, but only at punitive short-term rates; and further borrowing not only breaks with European Commission dictates but raises broader questions of solvency.

The situation is not exactly rosy in Britain with another bank bail-out, which, presumably, though Mr Thomas does not put it quite so bluntly, will be as efficacious as the last one.

For Mr Thomas the weakest of all links is Greece, something that will not surprise any of our readers as that country managed to scrape into the euro only by a great deal of fudging. There is the additional problem, not mentioned by Mr Thomas: most of those weaker, peripheral countries have had a great deal of money transferred into their economies from the other, somewhat stronger ones. That, too, may come to an end now.