Jobs for the (foreign) boys! 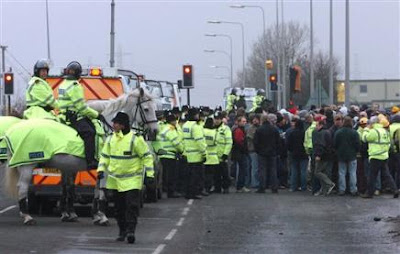 The elephant in the room is hard at work today – being invisible. From the BBC website and elsewhere, we learn that around 800 people took part in the demonstration outside the giant Lindsey Oil Refinery at North Killingholme, Lincs yesterday.

The workers walked out in protest to 250 jobs being given to foreign workers instead of unemployed locals following the awarding of a specialist contract to an Italian firm.

They have been supported by Derek Simpson, joint leader of Unite, who has called for urgent meetings with the Government and employers to discuss the "exclusion" of UK workers from some of Britain's major engineering and construction projects. "We have a growing problem in the engineering and construction industry," he says, "where UK workers are being excluded from important projects."

Some protesters at the refinery carried placards repeating Gordon Brown's slogan "British jobs for British workers". The union is calling for the government to take "urgent action to deal with this situation as tensions are reaching boiling point." Says Derek Simpson, "The contractors working on large projects like the 2012 Olympics and the construction of new power stations, must give UK-based labour a fair chance to work on the projects."

However, there is nothing at all that the government can do. Readers may dimly recall in 2007, two separate actions in the ECJ, one concerning the Rosella ferry and the other, about Laval un Partneri.

In the first case, a Finnish ferry company, Viking, had replaced the crew on one of its ships with Estonian workers, in order to cut costs. In the second, a Latvian construction firm Laval un Partneri Ltd had won a contract to refurbish a school at Vaxholm, Sweden, but the company sought to use cheaper Latvian workers rather than indigenous Swedish workers (or Latvians at Swedish rates).

As it stands, it looks like the Humberside workers are on a loser. Their strike cannot be allowed to succeed, otherwise it would be illegal under EU law and, in any case, the refinery and the contractors are entirely within their rights, again under EU law, to hire foreign workers.

One wonders if the workers out on strike know that they have been shafted, and whether they realise that they are enjoying the benefits of membership of the EU. And, if they do not know, shouldn't someone tell them?