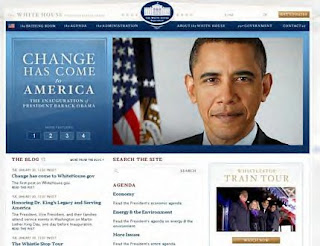 ... that President Obama will turn out to be as dishonest as he showed himself in his campaign and as unprincipled as his political background (hint: Chicago machine) would indicate. That would be much better than a Marxist ideologue, which is what some people were afraid of when they looked at his early friends and mentors. If Obama used the likes of Bill Ayers to rise in politics, my tears will remain unshed.

My high hopes are vindicated by the numerous references to "humility" made by the most arrogant, self-obsessed politician ever to be elected to the Presidency, in front of a crowd that, unnervingly, was chanting his name, instead of being awed by the office and the event. I think dishonesty covers that quite well.

Meanwhile, it looks like the actual inauguration ceremony was something of a mess. The booing of the outgoing President was disgraceful, whether you agree with the man or not. But, as I keep telling my American friends, it reminds me of 1997 here. These things do not last and the Obamabots will soon shrivel into discontent. Many conservatives are happier than they had expected to be. They obviously share my high hopes.

The inaugural poem seems to have been utterly terrible. Aretha Franklin, I am sure, was a joy to listen to. She always is.

The Rev. Joseph Lowery's Benediction degenerated into a racist rant, the exact opposite of what this election actually proved about America. Would Obama have really won if all white Americans were racists? Here is the video on Hot Air.

What of the birthday boy himself? The one I have such high hopes for? Well, he started by flubbing his oath, which is unfortunate in the circumstances. He then proceeded by making a completely uninteresting and cliche-ridden speech, seriously marred by gratuitous attacks on the outgoing Administration and suggestions that history and American leadership begins with him. The Anchoress has a good round-up. She is quite generous about the speech herself.

As a number of commentators have noted, Obama spoke as if he were still running a campaign and his supporters in the audience behaved like that, too. (Incidentally, the numbers were nearer to 1 million than the originally predicted 5 million.) I am not sure about the word "still". As I said before, he may well be planning on being inaugurated until the next presidential election. In fact, he may well have started the 2012 campaign in his inaugural speech. That would be a first in American history.

Back to real life, methinks. Michelle reminds us of what is being called the Generation Theft Act; more details here.

As for me, I shall go on having high hopes. I need to. If we are actually to believe Obama's various comments on foreign policy, the world is in dire trouble.