I'd say they are rejoicing too soon 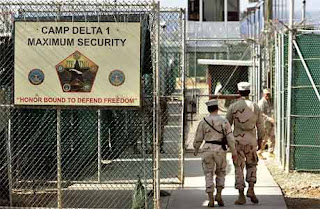 A couple of days age Der Spiegel had an article, which began with the words:

Everyone is talking about Guantánamo these days. Almost every country in the world reacted with relief, if not outright euphoria, to one of the very first announcements by the new President Barack Obama: The US military prison for terror suspects on Cuba would be closed. Torture and CIA secret prisons were finally to be a thing of the past.

The rest of the article is about the Bagram air force base in Afghanistan, which also holds terror suspects (shock, horror) and what is President Obama going to do about that. Surely, he will shut that down, as well.

I fear that the rejoicing is premature. It is not just the point that the cases of torture are under dispute and are, in any case, few and far between. I do not need to be told that our side should not use the methods of the other side but there is a problem of defining torture. That intensive interrogation of captured Nazis and ordinary soldiers and officers that the British conducted at the end of World War Two, which is so frequently brought up as an exemplar of what ought to be done with the enemy, would be described as torture by the people who shout about it in the American and European media about it now.

The story of Guantánamo is not over, by a long chalk. It is to be closed within a year (and some doubt is being expressed about that) but, in the meantime, all legal action has been suspended (and here we were thinking that it was the lack of legal cases that was most bothersome but clearly that was true only in the Bush Administration) and some thought is being given to the legal aspect of the situation and to what is to be done with the inmates.

One judge is rejecting the government's arguments that legal action should be suspended, finding them "unpersuasive".

That's right, those terror suspects need to be accommodated somewhere and, given the speed with which many of the released ones go back to the fight, made safe. It seems, according to recent Obama statements, that many of these people are dangerous. No kidding! I thought they were just innocent tourists, going about their business of toting guns, ammunition and explosives, when wicked neo-cons disguised as US marines pounce on them and drag them off to Cuba. Well, not to the part of Cuba where Castro holds political prisoners because we never hear about that. Actually, that might be the solution: hand Guantánamo back to Castro and let the Cuban secret police deal with the inmates.

We are about to hit another snag as Powerline reminds us.

The question of what to do with those prisoners at Guantanamo Bay came up again this morning. The Obama administration has asked our European allies to take some of them.

Fair enough. One does not have to be an admirer of the man (and I am not) to see the logic of that request. The trouble is that the European allies, who may be rejoicing at the thought of Guantánamo closing, do not, for understandable reasons, the responsibility of deciding what to do with the inmates who will no longer have an "in".

The EU's anti-terrorism supremo, Gilles de Kerchove, is not happy. He thinks the EU should have more time to discuss this matter (whereas, of course, Obama should shut Gitmo down immediately). It is a very complicated issue.

"President Obama said he will need a year to close Guantanamo, it shows how difficult it is," EU anti-terrorism coordinator Gilles de Kerchove told reporters.

"So we should not ask the EU to answer in 15 days, that would not be serious ... the ministers will discuss it again," he said after the bloc's foreign minister were split on this issue when they first discussed it at a meeting on Monday.

A day after being sworn in last week, Obama ordered the closure of the prison at Guantanamo Bay in Cuba, where prisoners have been detained for years without charge, some subjected to interrogation that human rights groups say amounted to torture.

Analysts say helping shut Guantanamo would be a good way for the EU to mend transatlantic ties, damaged over the U.S. invasion of Iraq.

"We are not at a point where we can say this country takes in three (inmates) and that one five, we are not there yet ... it is a very complex issue, it is not yes or no, black or white," de Kerchove said, pointing to complex legal and security implications.

Who on earth writes this stuff? Don't they even see how illogical the sequence of paragraphs is? And I am tired of repeating that more European countries supported and continue to support American in Iraq than opposed it. There are NO transatlantic ties to mend except, maybe, with France and Germany and they are all in a tizz about Obama.

Back to the question of those inmates whose fate the EU has not had a chance to discuss properly.

He recalled that under the Bush administration, Washington tried in vain, for years, to persuade its allies in the 27-nation EU to take in detainees who cannot go back to their home country and whom the United States does not want either.

We have written about these problems before.

M de Kerchove thinks it will be different now because President Obama is promising to shut the prison down. Which, if logic serves, would mean that the EU countries will really have to make a decision to take some of the inmates or run screaming for cover. So far, they seem to be choosing the second option.

What, I assume, M de Kerchove and the rest of the colleagues are hoping for is that even with the new Administration, the United States will continue to keep these rather dangerous individuals and if that means hypocritical attacks on that country, so much the better. At least, the EU and its members will not have to make any decisions.